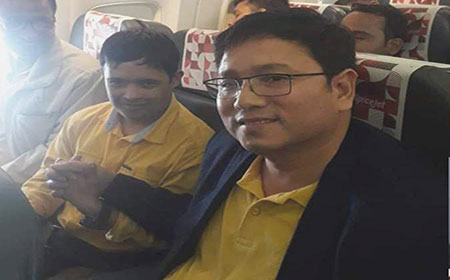 PASIGHAT, Feb 29: A doctor is never off-duty even when on a holiday.
Indian Medical Association’s state branch secretary Dr Jego Ori realized it on Friday when flying from Delhi to Guwahati.
Dr. Ori had gone on a tour to Dubai couple of days ago. On his return from Delhi, he boarded a Spice-Jet Airways flight on 28 February. During his journey, a co-passenger, who was a child, suddenly started to feel breathing problem. Dr Ori volunteered to help, when the flight attendant made an announcement, seeking doctor’s help.
The child was having difficulty breathing due to panic attack after turbulence in the plane due to bad weather.
He walked to the front seat to attend the child and gave him oxygen provided by the airline. After sometime, the child became alright.
The child was travelling along with his parents to Guwahati to see relatives. His father was a retired brigadier with Sharma surname from Noida.
The Spice Jet Airways thanked Dr Ori for his yeoman service and nominated him as the most favourite passenger of a day. He was offered to select gift item but honestly refused to accept saying, “As a doctor, it was my duty to offer help to a person in distress and emergency.”
He advised the airline authority to keep in the plane at least a pulse Oximeter to measure the blood oxygen level and the heart rate and, if possible, some emergency medicines.
Dr Ori is an ENT surgeon of Tomo Riba Institute of Health and Medical Science. He was awarded the prestigious ‘Tamrapatra’ by the IMA during its recently held conference in Madhya Pradesh.