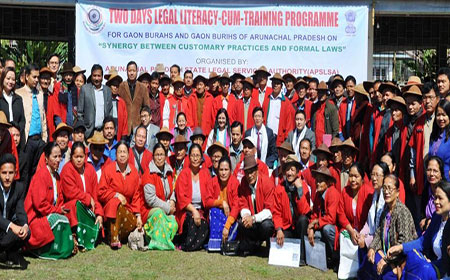 AALO, Feb 29: West Siang deputy commissioner Swetika Sachan has stressed the need for imparting necessary training to Gaon Burahs and Buris on civil and criminal nature of cases ‘so that they can handle such cases at the village level.’
The DC was speaking at the inaugural session of the two days legal literacy-cum-training programme themed ‘Synergy between customary practices and formal laws’ for GBs of Shi Yomi, Leppa Rada, Upper Subansiri and West Siang districts at Gumin here on Saturday. It was organized by the Arunachal Pradesh Legal Service Authority and the department of justice, Union ministry of law and justice under access to justice North East and Jammu & Kashmir Project.
She said that Lok Adalat which forms a part of the programme
is key for settling criminal and civil cases through quickest means.
“Many tribal customary laws as enshrined in Assam Frontier Regulation Act have been codified under Bogum Boka Keba to suit the present needs and institution of GBs which would enable them to settle petty local disputes in the village in a fair manner”, she added.
APSLSA member secretary Jaweplu Chai, in her address, stated that the Legal Service Authorities help provide free and competent advocates for the poor and needy.
‘Amended laws and projects like Legal Aid Clinic are being emphasized in the two training programms for GBs to acquaint them with changing context of laws,’ Chai disclosed.
AD&SJ-cum-West Siang and Upper Subansiri DLSA chairman, Tage Halley, and CJM-cum West Siang DLSA secretary, Habung Tangu also spoke on the occasion.
In the technical session, the participants were informed in details about topics including; village administration under regulation Act of 1945, forest laws and land holding system with special reference to Arunachal Pradesh, various beneficial schemes of central and state governments and tribal customary laws and RTI Act,2009. (DIPRO)