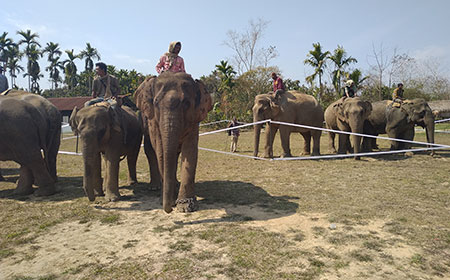 [ Pisi Zauing ]
SONGKING, Mar 1: Around 12 domestic elephants, a large number of cattle and pet animals were treated during a mega veterinary health camp organized by the 9th Battalion of Rashtriya Rifles (DAO division) at Songing village off Miao in Changlang district on Sunday.
Sunday’s was the first of its kind health camp organized for elephants and other domestic and pet animals by the army under its civic action programme.
A large number of villagers from Songking and nearby villages also attended the camp along with their livestock (cattle) and pet animals, particularly dog.
The health checkup and treatment were conducted by two army doctors. The owners were provided medicines and other dressing items free of costs.
Youth leader Pisi Zausan Singpho demanded another round of similar health camp at Lewang village as the livestock owners of that area couldn’t participate in Sunday’s cam due to communication gap.
The government-run veterinary hospitals in the region are still not in a position to provide necessary health care services to the elephants and other livestock.
GBs IntemnongSingpho, ChetkhumLungphi and senior public leaders KhantangLungphi, former GB InnaonongSingpho and NankhumMosssng on behalf of the villagers expressed gratefulness to the 9th Batallion of Rashtriya Rifles for organizing the animal health camp and providing sufficient medicines to the livestock owners free of cost.
There are around 83 domesticated elephants in Changlang and Namsai districts.