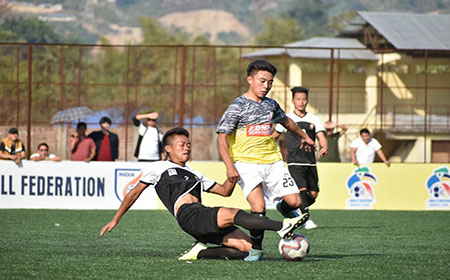 CHIMPU, Mar 1: Vivek Gurung scored a hat-trick as Capital Complex FC routed Bamang Taji FC (BTFC) 6-1 in the Indrajit Namchoom Arunachal League (INAL) here on Sunday.
Dari Lugu scored the quickest goal (first min) of the ongoing league, giving Capital Complex a flying start. BTFC were yet to settle down, when Sandeep Alay hammered in the second goal in the fifth minutes (2-0). Gurung netted the third goal in the 25th minutes.
Capital Complex were leading BTFC 3-0 at the end of the halftime.
Gurung scored his second and the team’s fourth goal in the 69th minutes and completed his hat-trick by scoring in the 72nd minutes.
Nabam Peri also scored for Capital Complex in the 65th minutes.
The consolation goal for BTFC came through a brilliantly taken free -kick by Toko Poliam in the 72nd minute.
In another match, Todo United defeated Kargu Kardi FC 4-0 in their fifth and last league level match to stay atop the point table with 10 points.
Taba Heli (25th, 90th mins) and Tapi Hakhe (29th, 51st min) scored brace each for TUFC.
Capital Complex jumped to second spot in the point table with 9 points from four matches. They will play their last league match against Keyi Panyor on 4 March.
Gora Makik SC (GMSC) are at the third spot with seven points from three matches while BTFC are at the fourth spot with six points from four matches. BTFC will meet GMSC on three March. A mere drew will ensure BTFC their place in the top four.
Kargu Kardi FC are at the fifth spot with three points. They have played four matches, won one and lost three.
Keyi Panyor FC are yet to open their account. They have lost all the four matches played so far.