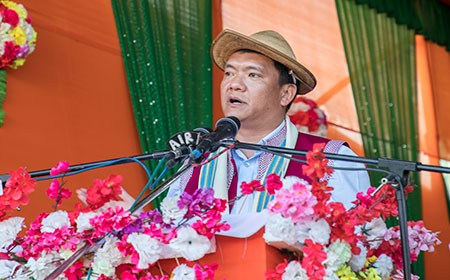 SEREN, Mar 1: Chief Minister Pema Khandu on Saturday attended a public meeting here at Nari Koyu Assembly constituency in Lower Siang district, and assured the people that “announcement of the new district headquarters will be made soon.”
He informed that a committee under the deputy commissioner has been constituted to study the best possible site for headquarters, taking into consideration people’s opinion, feasibility of site and all other conditions.
The chief minister said the decision on district headquarters will be made finally through a cabinet sitting and the process has already been initiated.
Khandu said that the BJP as a party does not believe in keeping the matter pending. He said the issue of Lower Siang district demand had been kept pending for long, but after his government took over he immediately deputed the deputy commissioner and superintendent of police, and made the district functional.
He said, “the BJP does not do appeasement politics and instead tries to solve the issues of the people.”
Khandu also said the government is ready to cleanse the system but would require firm resolve of all the government employees. He said ‘politicians come and go but those in the system seated permanently must first affirm to change the system’. (CMO PR Cell)