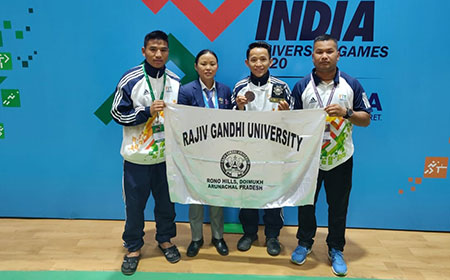 ITANAGAR, Mar 1: Promising boxer Heli Tana Tara (49 kg) settled for a bronze medal in the first Khelo India University Games, losing to Punjabi University Patiala’s Gurwinder Singh.
He lost 1-4 to Singh in an intense semifinal on Saturday at Bhubaneswar in Odisha.
He represented Rajiv Gandhi University (RGU) in the games.
Despite the loss, it was a stupendous campaign for Tara.
He had won a gold medal in the recently held All India Inter-varsity Boxing Championship in Uttar Pradesh. He was adjudged best boxer of the championship in the men’s category.
He had also won a gold medal in the
BFI North East Zone Boxing Championship, which was held in Assam’s Chirang district from 3 to 6 January.
RGU Vice-Chancellor Prof SaketKushwaha congratulated Tara for his outstanding performance.
“University should act as the promoter and driver of sports and physical education,” he said.
The VC reiterated that RGU is committed to developing sports and physical education in the state and NE region.
Expressing his immense happiness over the performance of the RGU students in various sports events, Kushwaha informed that during the last three months, the sportspersons from RGU have won one gold and two bronze medals in boxing, a silver medal in kickboxing and a bronze medal in karate in All India Inter-University Games and Khelo India University Games.