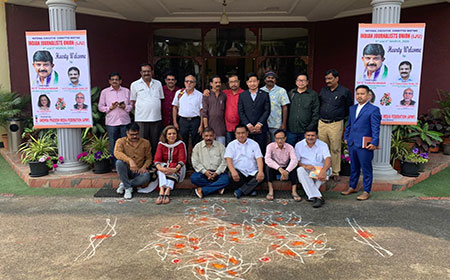 AMARAVATI, Mar 4: The Indian Journalists Union (IJU) raised serious concern over series of brutal attacks on journalists covering the Delhi riots, allegedly based on religious identity, during the first day of the two-day national executive council meeting of the IJU, that got underway in a city-based resort here in Andhra Pradesh on Wednesday.
The IJU NEC meeting is being hosted by the Andhra Pradesh Media Federation (APMF) and is being participated by working journalists’ unions of 13 states, including the Arunachal Pradesh Union of Working Journalists. A three-member team from Arunachal Pradesh is led by APUWJ president Amar Sangno, and includes APUWJ assistant general secretary Sonam Jelly and Arunachal Press Club secretary general Tanom Jerang.
Chairing the meeting, IJU president Geetharta Pathak said, “In the recent Delhi riot, journalists were targeted based on religious identity. Many journalists covering the riot were forced to take off their clothes and many were subjected chant religious lines to identify their background. This is a serious threat to the press safety” said Geetharta Pathak.
IJU president Pathak further stressed on the importance of documenting such incidents, and publishing it in appropriate forums. He said that “though documentation may not make an immediate impact, such exercise will indirectly pressurize the authorities concerned to acknowledge such instances and initiate measures to prevent it.”
Citing instances of brutality against journalists across the nation, especially in Delhi following the communal riot that broke out in the wake of protest against CAA and NRC, the house expressed its strong condemnation over such repeated incidents.
IJU secretary general Sabina Indrajit called upon all the state journalist unions to be proactive towards this end and also advised them to do follow up of such incidents. She added that it is the state units who can verify the details of such incidents, required to pursue such matter in international platforms.
Meanwhile, several opinions were put forwarded by the house as measures to tackle such incidents. The IJU secretary general acknowledged that a dedicated committee within the IJU needs to be constituted to take up such issues.
Taking part in the discussion, Jerang suggested that the IJU adopt certain set of steps to pursue such matters. “Adopting set process will not only encourage victims to fight, but will also ensure that the union keep pursuing it till the issue gets resolved,” he said.
During the technical session, the house present also discussed various other issues including screening of journalists to filter out those who join the profession to take undue benefits of the ‘press’ tag.