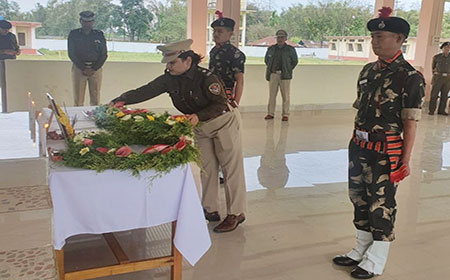 AALO, Mar 4: State DGP RP Upadhyaya on Wednesday met the relatives of IRBn constable, Tapop Yajo who was gunned down here in West Siang district and assured them of all possible help.
A constable in the 5th IRBn, late Yajo was shot dead on early Tuesday morning while on duty in the premises of the chief judicial magistrate (CJM), Aalo.
DIG (Central Range) Isaac Pertin and CO 5th IRBn Esha Pandey had rushed to Aalo upon hearing about the incident. Pertin is currently camping here to monitor the case.
The district police has reportedly withdrawn the Irbn from the court duty citing lack of facilities.
The DGP and CO also participated in a condolence meet held at the headquarters of 5th IRBn in Pasighat. The DGP and other officers along with the personnel of the battalion paid their homage to late Yajo in a moving ceremony.
The Arunachal Pradesh Police has also informed that a case has been registered in this connection and investigation is underway. The APP stated that it takes the safety of its personnel very seriously and assured that they will make full efforts to bring to justice the culprit(s).
State Legislative Assembly Speaker Pasang D Sona has also expressed deep shock and sorrow over the untimely demise of Yajo. In his condolence message to the wife of late Yajo, the speaker said that not only the police department but the people of entire state, especially the people of Shi-Yomi district are immeasurably indebted to the supreme sacrifice made by him on the line of duty.
Condemnations have also poured in on the incident with the Gauhati High Court Itanagar Permanent Bench, Bar Association (GHCIPBBA) expressing its extreme displeasure on the alleged failure of the district administration and police authorities of West Siang district for not being able to resolve the repeated occurrence of arson at the CJM court premises.
The association has resolved that a 12-member delegation will visit Aalo on Thursday to ascertain the ground situation for further course of action.
The Adi Students Union (AdiSU) has also written to the West Siang deputy commissioner, seeking arrest of the culprit(s) involved in the killing of late Yajo within the next 48 hours. The AdiSU also sought compensation for the victim’s family amounting to Rs 1 crore; establishment/ erection of a statue of the late Yajo on the court premise within a week and declaration of 3 March as Martyr’s Day every year in the memory of the late constable.
The union has threatened to launch an agitation if their demands are not met at the earliest.
The All Shi-Yomi District Students Union (ASYDU) has also submitted a five-point memorandum to the West Siang deputy commissioner with similar demands.
The ex-servicemen Association of Arunachal Pradesh (ESMAAP) have also expressed sadness over the tragic killing of the IRBn constable. The association informed that the late constable is the brother of Kirti Chakra (Posthumous) Nk Tape Yajo of 1 Assam Regiment, who made supreme sacrifice in the line of duty. The ESMAAP has strongly condemned the ghastly crime and requested competent authorities and investigation team to catch the culprit(s) immediately and ensure stringent punishment as per the law.