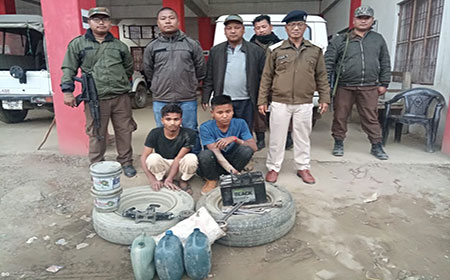 LONGDING, Mar 4: State police on Wednesday arrested two automobile lifters here and recovered a stolen vehicle (Tata Sumo), spare parts and tools from their possession.
The accused, Md Ismail Ali (20) and Ghaneshwar Moshahary (19), were apprehended from their residence in Tissa on Wednesday evening, informed Longding SP BR Reddy.
They were allegedly involved in striping of spare parts, like tyres and batteries from parked vehicles in the Longding market.
Police swung into action after receiving complaint from many car owners, launched a hunt for the suspects with the help of CCTV footage and finally succeeded to arrest them.
Ten car tyres with rims, and tools, including jacks, wrenches were recovered from their possession. (DIPRO)