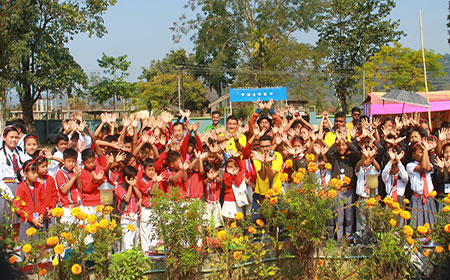 Staff Reporter
MIAO, Mar 9: As many as 176 butterfly species were recorded during the four-day Namdapha Butterfly Meet (NBM), which concluded here in Changlang district on Sunday.
The butterflies were recorded in the areas around the Namdhapa National Park (NNP).
The meet, sponsored by the tourism department, was organized by the Society for Education and Environmental Development (SEED), in collaboration with the NNP and the Miao Explorers, with support from Dapha Valley Tours and Travels.
Visitors, including prominent butterfly experts, from Assam, West Bengal, UP, Kerala, Maharashtra, Karnataka, Tamil Nadu, Sikkim, Meghalaya, Uttarakhand, Delhi, Jharkhand and Andhra Pradesh took part in the meet.
Various events were conducted during the four-day meet. An attempt to paint the most number of butterfly paintings on stones was made by schoolchildren on the second day of the event. Altogether 150 students from different schools here painted 3184 butterflies on stones within an hour and a half.
The third day featured a ‘cyclothon conservation ride’ from Miao to the NPP and back by a team of cycling enthusiasts from the Itanagar Riders Club. The organizers later distributed prizes to the cyclists.
On the final day of the meet, a tour to New Yumchum tourism village was organized, allowing the participants to experience the village’s culture and its residents’ efforts to promote ecotourism.
iNature Foundation’s chairman, Isaac Kehimkar, who is popularly known as the Butterfly Man of India, was the resource person. Kehimkar is an avid naturalist and the author of The Book of Indian Butterflies.
Expressing joy over the thriving butterfly population in the state, Kehimkar said Arunachal should be named “the butterfly capital of India” because of the abundant and diverse species of butterflies it houses.
He appealed to the people to make every effort to conserve the butterflies, stating that their survival is very important for nature.
SEED deputy director Minom Pertin, who is also a butterfly enthusiast and an avid photographer, informed that the annual meet is organized to “attract people towards nature through butterfly as a medium.”
“This meet is being held annually since 2018, and with each year we are witnessing more number of participants. The active participation of the local youths and community members has taken this edition to a new level,” he said.
Cultural programmes were also presented during the meet, showcasing the state’s rich tribal culture and tradition.