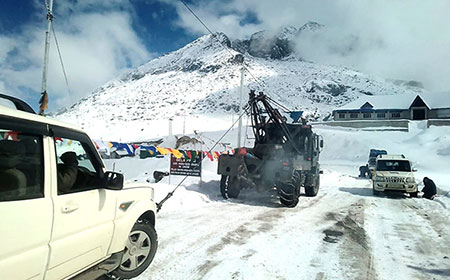 ITANAGAR, Mar 9: The Indian Army rescued 390 people who were stranded at Sela Pass in Tawang district due to heavy snowfall, a defence official said on Monday.
The rescue operation was carried out at an altitude of 14,000 feet on the intervening night of 7 and 8 March, Tezpur-based Defence Spokesman, Lt Col Harsh Wardhan Pande, said.
The rescued people were provided with immediate medical support and hot snacks.
Besides saving precious lives, the 16-hour-long operation in sub-zero temperature strengthened the bonhomie and bonding between the Army and the civilians, the spokesman said. (PTI)