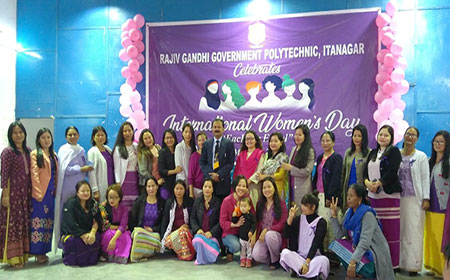 KOLORIANG, Mar 9: An awareness programme on marriage registration and legal aid was organized by the Koloriang branch of the Arunachal Pradesh Women’s Welfare Society (APWWS), in collaboration with the women & child development department and the Kurung Kumey district legal services authority as part of the International Women’s Day (IWD) celebration here on Sunday.
Addressing the gathering of women, Koloriang KGBV Chairman, Chera Nekia, advised them to form self-help groups to generate income and improve their livelihood.
Earlier, ICDS Deputy Director Dhani Yami launched the Poshan Pakhwada in the district and organized a ‘poshan marathon’. A cleanliness drive was also carried out at the general ground here.
Among others, Koloriang APWWS branch president Riya Kabak Nangram attended the programme.
In East Siang HQ Pasighat, female grassroots achievers, progressive farmers and entrepreneurs, along with ASHAs and anganwadi workers of the district were felicitated during the IWD celebration at the College of Horticulture & Forestry.
The programme was jointly organized by the district administration, the BPGH&TC (GNM School of Nursing) and local NGOs as part of the ‘Arunachal Rising’ campaign.
Speaking on the occasion, DC Kinny Singh said, “Women empowerment is the key to increase their participation in decision-making for all-round development of the society.”
She also stressed the need for generating proper awareness regarding the schemes and policies designed for women.
5th IRBn Commandant Esha Pandey and CJM Mary Kamsi spoke about the legal provisions available for women’s protection, besides women’s rights and empowerment.
Earlier in the day, local MLA Kaling Moyong’s wife, Kenrik Ete Moyong, inaugurated a biweekly market for women SHGs, artisans, artists and entrepreneurs at Gidii Notko, and a recreation centre at the one-stop centre (OSC) here.
The DC, who was also present, said “the OSC has been providing a range of services under one roof to women affected by violence, and the establishment of the recreation centre would provide conducive and stress-free environment.”
ICD PE Deputy Director Angu and advocate Mary Tatak also attended the programme.

The women & child development (WCD) department screened a Hindi feature film on domestic violence as part of the IWD celebration in Itanagar on Monday.
The film, titled Thappad, is based on the evil effects and consequences of domestic violence on family relationships and the society.
Couples from various sections of the society, including anganwadi workers and helpers, members of NGOs, and government employees viewed the film.
WCD Director Tokmem Pertin Loyi highlighted the theme of the movie and the objective behind screening it on the occasion of IWD.
State nodal officer for Poshan Abhiyan, DK Thungon, highlighted the importance of the Poshan Pakhwada being celebrated from 8 to 22 March.
The film was screened under the initiative of WCD Secretary Niharika Rai.
IWD was also celebrated in a befitting manner at Rajiv Gandhi Government Polytechnic in Itanagar. RGGP Principal, Dr AK Tripathy, along with the institute’s students and teaching and non-teaching staffs participated in it. (With DIPRO input)