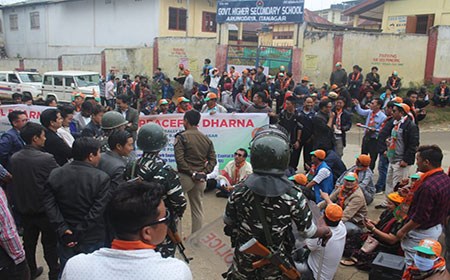 Staff Reporter
ITANAGAR, Mar 9: A crack within the state BJP is emerging with former councillor and BJP ideologue, Gora Lotak, on Monday leading hundreds of party functionaries and workers in staging a dharna to demand cancellation of Tarh Soping’s appointment as the president of the party’s Itanagar district unit.
The agitating party workers staged the dharna, themed ‘Save capital district unit’, in front of the BJP’s office here, and shouted slogans such as “Save capital district unit” and “Bharat mata ki jai!”
They claimed that Soping’s appointment was in violation of Article 21 of the BJP’s bye-laws, which states that ‘any eligible member can hold the post of president for two consecutive terms of three years each’.
In a representation to the state BJP president, Lotak said Soping has already served two terms as the district unit’s president, from 2014-2016, and from 2016-2019.
“Reappointment as 3rd terms president of capital district unit BJP, session 2020-2023, is a violation of the BJP constitution under Article 21,” Lotak said.
“We spoke to the BJP’s Northeast in-charge, too. It has been 11 days (and) no one is responding to us. That is why we are staging the dharna here today,” Lotak said.
The agitating workers alleged that Soping was an “inefficient leader,” and claimed that the party suffered losses in the 2014 and the 2019 elections in the Itanagar assembly constituency during Soping’s time as the Itanagar district president.
They also alleged that mass resignations were witnessed at the booth, mandal and district levels during Soping’s tenure.
The representation also claimed that out of the 52 elected booth level committees (BLC), “90 percent is against Soping’s leadership and are in support of (having) Lotak as the president of the capital district unit.”
Reportedly, some of the BLC members have resigned their posts in protest against Soping’s leadership, claiming that his appointment went against the party’s bye-laws.
However, the party’s general secretary, Raha Tagin Tara, clarified that the members resigned without the knowledge of the mandal president and the president of the capital district unit.
“The mandal president did not forward any copy of the resignation letters to the district unit president, and thus the resignations would not be treated officially,” Tara said.
Meanwhile, Soping said that the party’s high command has appointed him as the district unit president and the agitating workers should respect the high command’s decision.
“There are other members too who have been appointed for a third time, despite the provisions in the party’s constitution. But the high command can take the call, depending on the workers’ performance,” Soping said.
Describing the agitation as “the party’s family matter,” Soping said “the BJP being the largest political party in the world, such agitation is a democratic way of expressing dissent.”
He also said he was unaware of the resignation of the workers in protest against his leadership.
This daily was unable to get a statement from the party’s state president, Biyuram Wahge, who is currently in New Delhi.