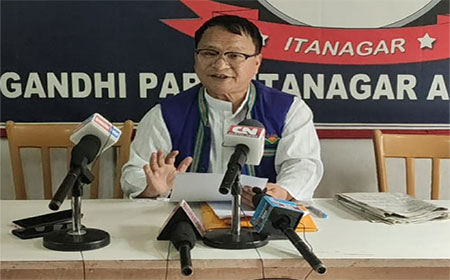 Staff Reporter
ITANAGAR, Mar 14: Former minister Bida Taku on Saturday demanded that the state government issue a clarification on the allegation of malpractice in inviting tender for iron ore exploration in Laggi-Gamlin and Yomcha areas in West Siang district.
Taku claimed that the short notice tender issued by the geology & mining department for publication on 22 February this year for iron ore exploration in Laggi-Gamlin and Yomcha was “misleading and amounts to criminal conspiracy.”
Addressing reporters at the Arunachal Press Club here, the former minister said “the published short notice tender does not have any necessary details like last date for submission of tender documents, etc.
“It directs the interested company, consultant or agency to refer to the website, http://arunachalpradesh.gov.in, for details, but the tender is not available on the website and even the department of geology & mining is not listed as one of the departments on the website,” he said.
Stating that geology and mining is a central government subject, Taku questioned the legality of issuing such tender by a state department. He demanded that the state government clarify whether it has signed the required MoU with the Metal Scrap Trading Corporation Ltd (an undertaking of the central government) and obtained permission to float the tender.
Also claiming that “senior geologists of the state government are also unaware of such laid down norms and procedures,” Taku questioned the competence of the authorities concerned in handling such subjects.
He demanded that the tender be cancelled and a fresh one floated if the state government fails to clarify the matter.
On being contacted, Geology & Mining Director, Tassar Tallar, said there has been no lacuna or manipulation from the department’s end.
“The department prepared the tender maintaining all terms and conditions and several parameters, with the help of various committees and sub-committees, to maintain transparency,” he said.
Informing that there are currently three bidders after the tender was floated, the director said, “Mining involves several complexities and not everyone participates in them. The bidders have to have heavy earthmoving machines, besides provisions for geological and structural setups.”
He also informed that the tender is “still under process and the department is yet to offer the letter of intent to the highest bidder as it is still under examination by the department.”
The director requested the former minister to submit a complaint, if any, to the office, “so that the department can examine the matter for any alleged lacuna or manipulation.”