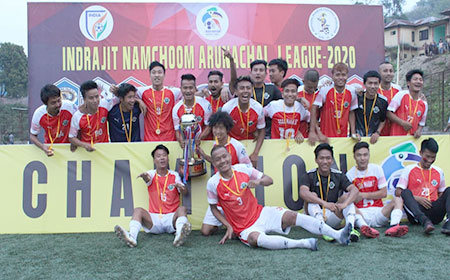 CHIMPU, Mar 14: Gora Makik SC (GMSC) retained the title after they defeated Capital Complex FC (CCFC) 4-2 in penalty shootout in the final of the Indrajit Namchoom Arunachal League (INAL) here on Saturday.
In a repeat of the first semifinal, where both teams faced off each other, CCFC took the lead through Sandeep Alay in the 73rd minute. GMSC equalized it five minutes later through a corner kick by substitute striker Beken Riram.
GMSC could have finished off the match within the regulation time itself, had not Gyamar Tala squandered a golden scoring opportunity that had come to the fore just before the referee blew the full-time whistle.
The match eventually went to penalty shootout after the teams were locked 1-1 at the end of the extra-time.
CCFC’s Sandeep Alay was adjudged the best forward of the league, and his team mates Taw Akash and Agano Linggi were declared the best mid-fielder and the best defender, respectively.
The award for the best goalkeeper was grabbed by GMSC’s TT Sunickjee for the second consecutive time. Todo United’s Tapi Hakhe became the highest scorer with seven goals in his kitty.
GMSC’s Tame Agung was chosen as the most valuable player for his outstanding performances throughout the league.