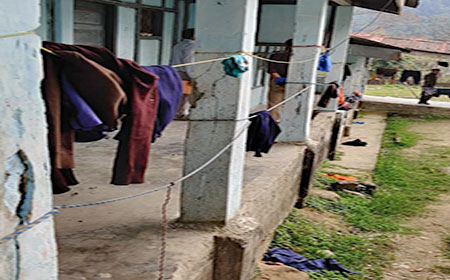 ‘My son was murdered,’ says father

[ Taba Ajum ]
ITANAGAR, Mar 16: “I have lost my son but I don’t want others to lose their children. I hope the police will investigate properly and punish the culprits, so that a strong message is sent out. I don’t want anyone to suffer like my family is suffering,” said Ngurang Taluk, father of Ngurang Paro, the Class 6 student who was found dead at the Sher VKV on Friday.
When journalists gathered at Taluk’s home in Kimin on Monday, the family members were still grieving the loss of their precious child. Paro was the youngest of the siblings and was deeply adored by everyone in the family.
“I will be extremely disappointed if the authorities fail to provide justice to me,” Taluk said, as his wife, Ngurang Yamang, sitting beside him, wiped tears from her eyes.
Even in the midst of the tragedy, Ngurang Taluk was an extremely composed gentleman. He said neither he nor his late son would be at peace unless justice is delivered.
Alleging that Paro was murdered, he said the suicide theory was being floated to cover up the murder.
“Two boys brutally attacked him, and another two guarded the bathroom, so that no one could save him. There were injury marks all over my son’s body. He has been murdered. I am telling the truth and not exaggerating a single word,” Taluk said.
He said Paro died in the school campus itself and the Sher VKV authorities failed to protect his son.
“The school administration should have been more careful, considering the history of violence among children in that school. The teachers, the principal and the wardens failed to perform their duty. They knew about the torture being inflicted on my son but never told us about it. Had they been more alert, my son’s life would have been saved,” he said.
He added: “When we keep children in a hostel, we do so with the hope that they will be safe and will have a better future. Sometimes when we visited our children, the teachers asked us not to disturb by visiting too often. We trusted them, but the trust has been breached.”
Taluk said that till now not a single official from the VKV has tried to reach out to the family.
“I can’t get back my son. The VKV authorities should tell me what I should do now. The VKV is an old institution and we respect it. My family members were very angry with their negligence, but we never used violent ways to protest. I am waiting to hear from them,” the father added.
He also said it was not the school authorities but the police who informed the family about the incident.
“I got a call from the police, saying my child was unconscious – which was untrue – and was at the Kimin hospital. I immediately rushed to the hospital as I was at a nearby market. When I reached, my son had already stopped breathing. I started crying and looked for the teachers who had brought him. But there was no one,” Taluk said.
He appealed to the state government to immediately bring a strong law against bullying, and said the schools should be made safer for the children.
On being contacted, Kimin SDPO Dekia Gumja said the investigation is on in full swing, and gave assurance that the police would try to complete it at the earliest.
“We are taking the case very seriously. A case under Sections 306 and 323/34 IPC has been registered,” Gumja said.
The SDPO informed that a group of four doctors constituted by the Kimin ADC conducted the postmortem. “The report will further help to fast-track the investigation,” he said.
Meanwhile, the school’s principal and the two wardens who were arrested on Saturday have been sent to judicial custody, and the four juveniles who were involved in the fight with the deceased have been sent to the juvenile home in Pasighat, East Siang.
The mood in the Sher VKV campus was sombre, and the teachers looked worried. They were not authorized to give a statement to the media, but all of them privately admitted that the incident has deeply impacted them.
“We are hurt and saddened by the whole incident. We will extend all possible cooperation to the investigating authorities,” one of the teachers said.
All the examinations at the school have been suspended and the students have been sent home. The Papum Pare police have stationed an IRBn platoon in the school premises for the safety of the teachers and the school.
Paro was found dead, allegedly by hanging, in the VKV’s hostel on Friday evening. Prior to that, he had reportedly been brutally assaulted by his own classmates after a fight had broken out over a bottle of aerated drink.