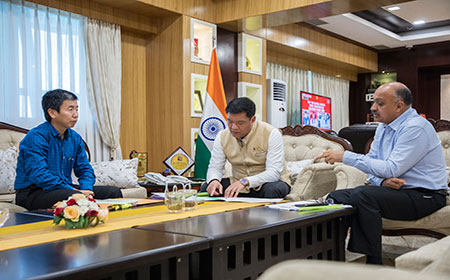 ITANAGAR, Mar 16: Expressing concern over the disturbance that may affect the biodiversity and wildlife due to the proposed construction of a road through the Pakke Tiger Reserve (PTR) in Pakke-Kessang district, Chief Minister Pema Khandu on Monday issued an order to keep in abeyance “all survey works, ongoing or scheduled,” for the road.
The proposed 40 km road is part of the East-West Industrial Corridor project to connect Seijosa in Pakke-Kessang district with Bhalukpong in West Kameng. As reported, the proposed road passes through the PTR, which is a biodiversity hotspot of the eastern Himalayas.
During a meeting here with the chief secretary and the PWD commissioner, Khandu said he has decided to halt all survey works for the proposed road, in order to preserve the tiger habitat.
“The PTR, which is home to over 2000 species of plants, 300 species of birds, 40 species of mammals, 30 species of amphibians and 36 species of reptiles, is one of the most protected sanctuaries in the country, and the pride and treasure of Arunachal Pradesh.
“As many species of flora and fauna are globally threatened, and the PTR is one of the last remaining strongholds left for these species, we are committed to preserve it for our coming generations,” he said.
“We are aware that any infrastructural development that can be detrimental to the tiger reserve in the future needs to be considered seriously before proposing it,” Khandu said.
The chief minister proposed holding a detailed review meeting on the issue soon with the environment & forest department, the PWD, and all local stakeholders to chalk out further course of action. (CM’s PR Cell)