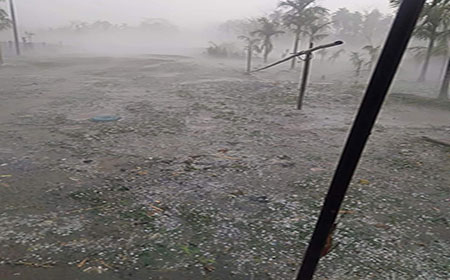 Correspondents
RUKSIN, Mar 16: Strong wind accompanied by hailstorm lashed Ruksin in East Siang district and nearby Jonai in Assam on Monday.
The strong hailstorm lasted for over 20 minutes, causing damage to vegetables and winter crops in the area, besides damaging a few houses. However, there were no reports of any loss caused by the hailstorm.
Meanwhile, a powerful short-duration storm accompanied by hail and rain hit Changlang district on Monday evening.
The storm caused extensive damage to the 33 kv transmission line at various locations in Jagun, Kharsang and Miao, snapping power supply.
It also damaged the main transmission line near Wada village, between Jagun and Jairampur.
The power department swung into action immediately after the storm to restore the power supply. It is unlikely that the department would be able to restore the electricity by Monday night because of the severity of the damage.