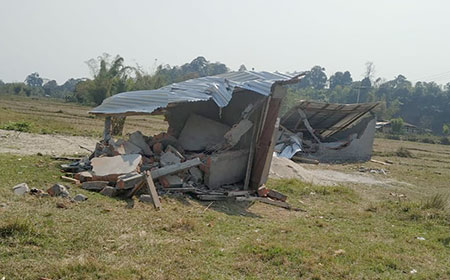 ITANAGAR, Mar 18: Assam forest officials on Tuesday allegedly destroyed property of the Nyokum Namlo at the Kakoi Nyokum ground in Papum Pare district.
As per reports, the officials completely damaged the structure by using excavators and also demolished two huts of farmers before leaving the area. The locals there informed that a group of people, allegedly from the forest department of North Lakhimpur district of Assam, having a beat post near Kakoi circle headquarter, were part of the demolition team.
Talking to this daily, Kimin ADC Likha Tejji informed that he, along with SDPO Dekio Gumja, visited Kakoi on Wednesday.
“The circle officer has been camping for the last two days, and we visited today to check the law and order situation. We are going to apprise higher authorities about the ground realities soon,” he said.
The ADC also expressed concern over the unilateral action of conducting eviction drive inside Arunachal’s territory by Assam officials.
It is to be mentioned that recently, the Assam forest officials created obstruction in the construction of PMGSY road from Lekhi village of Doimukh circle to Buka-II village of Kimin circle and also in the construction of PMGSY road in Taraso circle- both under Papum Pare district.
Meanwhile, the All Nyishi Students’ Union (ANSU) has appealed to the state government to break its silence on border disputes and initiate talks with its Assam counterpart for appropriate action against the officers involved in the alleged illegal eviction made at the Nyokum ground at Kakoi under Papum Pare district.
In a representation to the chief minister on Wednesday, the ANSU said, “On observation, it has been found that there is no conflict or dispute between the local inhabitants residing near the boundaries of Assam and Arunachal Pradesh and they do acknowledge the order of the Supreme Court to maintain the status-quo. But we have found that it is always the Assam forest department who does the illegal evictions and creates a tense atmosphere in the boundary areas.”
The union claimed that a team of the Assam forest officials entered Kakoi on 17 March last at around 2 pm with excavator bearing illegal registration number of a Bolero car, and destroyed the infrastructure of the Nyokum ground.
“We, the Nyishi community consider Nyokum as sacred, as our pride and identity. And destroying such a sacred place has hurt the sentiments of the entire Nyishi community,” it said.
The union has also sought immediate granting of fund in order to reconstruct the damaged infrastructures of the Nyokum ground at Kakoi.