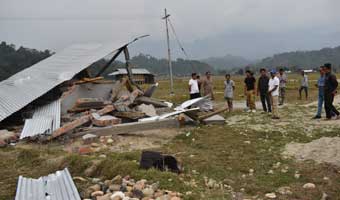 KAKOI, Mar 19: Youth leader from Doimukh assembly constituency Nabam Vivek has appealed to the governments of Arunachal Pradesh and Assam to amicably resolve the vexed boundary issue between both states, which is currently pending in the Supreme Court of India for the last several decades.
Vivek, along with local leaders, gaon burahs and others on Thursday visited the Nyokum ground at Kakoi and other properties allegedly damaged by the Assam forest officials here on 17 March. They met the locals and appealed to them to maintain peace.
Talking to the media, Vivek said that “it is saddening to see that such eviction drives are being carried by the officials of the forest department and Assam Police time and again inside the territory of Arunachal Pradesh in the name of boundary dispute.”
Terming Assam as the big brother of the North East region, he urged them to maintain peaceful relation with other states of the region.
Expressing sadness over the incident of the destruction of the Nyokum ground, he urged Assam officials to apologize to the Nyishi community for hurting its sentiments. Further, he said as both the states are ruled by the BJP, a roundtable discussion should be held to resolve boundary dispute instead of waiting for the SC ruling.
“Time and again there has been violation of status quo by the Assam officials. They have been harassing the people of Arunachal living along the boundary,” he said.
Vivek also appealed to the government of Arunachal Pradesh to immediately compensate the loss occurred at Kakoi because of the eviction carried out by the Assam forest officials.
Kakoi Circle Officer Padi Tapa informed that on 18 March, the Kakoi to Itanagar APST bus service, carrying about seven passengers, was also stopped by the youth on its way near North Lakhimpur.
“The matter was immediately informed to higher authority and it was taken up with the Assam counterpart. The bus was later released on intervention of the North Lakhimpur district administration,” the circle officer added.

Strict action sought against erring Assam forest officials:
Strongly condemning the destruction of the property of the Nyokum Namlo at the Kakoi Nyokum Ground allegedly by the Assam forest officials, the Nyishi Indigenous Faith and Cultural Society (NIFCS) has appealed to the state government to initiate strict action against the erring officials of Assam forest department and book them under prescribed law of the land.
“We have witnessed several instances of violation of ‘status quo’ by Assam in our border areas. However, recent destruction of the Nyokum Yullo Namlo is a deliberate act of attacking the religious structure of the Nyishi indigenous faith and beliefs,” the society claimed in a release on Thursday.