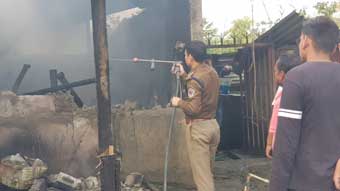 NAHARLAGUN, Mar 19: Three stores of motor parts items along with four rented semi-permanent rooms were completely gutted in a devastating fire which occurred at ‘A’ sector here around 2.42 pm on Thursday.
Three fire tenders were rushed to area, who later managed to douse the fire preventing it from spreading further. However, no casualty has been reported.
Cause of the fire has not been ascertained yet.