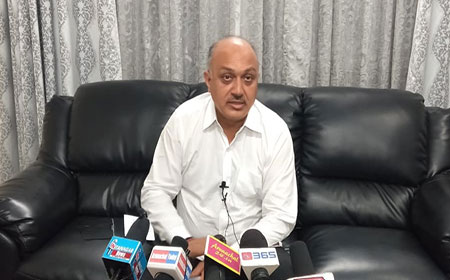 Staff Reporter
ITANAGAR, Mar 22: The Arunachal government has announced partial lockdown of the state following Sunday’s nationwide ‘janta curfew’ to curb the spread of the novel coronavirus (Covid-19).
Chief Secretary Naresh Kumar issued a notification late Sunday evening, informing that the partial lockdown will come into effect from 5 pm of 23 March till midnight of 31 March.
The notification stated clearly that stores selling food, including PDS, groceries, general provisions, vegetables, fruits, meat, fish, eggs, bread and milk, along with veterinary services and animal fodder, including their storage and transportation, will be open.
Kumar said there is currently enough stock of food and fuel in the state to last around 40 days.
Supply chains will remain open, as well.
As per the notification, operation of public transportation, including taxis and autorickshaws, will be suspended, “except for the purpose of hospital visits and transport carrying essential goods, including food and fuel.”
While interstate commercial transportation will be suspended, those in private vehicles can continue to commute. POL (petroleum, oil and lubricant) services will also remain open. All stores, barring pharmacies and those selling essential commodities, will remain shut.
Ambulances, fire and emergency services, vehicles used for law and order duties, and those of the press will be allowed to ply.
Although government offices will not be closed, the chief secretary said the departments have been advised to work with minimal staff required.
While government offices will be open, those in the private sector have some respite as their employers will have to mark them as being on duty and have to pay them their full salaries.
Banks and ATMs will also remain operational, as will the media houses.
However, the notification does prohibit the gathering of more than 10 people in public places.
Those violating the order will be prosecuted.
Earlier in the day, Union Cabinet Secretary Rajiv Gauba held a meeting with the chief secretaries of all the states. The state governments have been advised to take any appropriate measures required to ensure that the disease does not spread.
No local positive cases have been detected in the entire region yet.