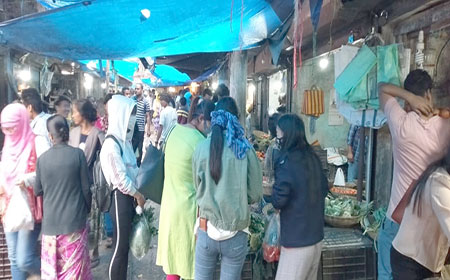 [ Nellie N Manpoong ]
ITANAGAR, Mar 23: Scores of people failed to pay heed to the directive issued by the health department and the state government to maintain a metre’s distance from others and to not panic-purchase as people crowded the markets to stock up, and in some cases hoard, essential items for the weeklong lockdown in the state from 23 to 31 March.
Even as some districts maintained calm, the capital region saw higher sales with some people resorting to hoarding essential items and emptying out shops, while a few fuel depots ran out of stock. (On being contacted, Chief Secretary Naresh Kumar later said, “We will take appropriate action” in the matter of hoarding.)
A shopkeeper in Itanagar informed that he had sold items worth Rs 5 lakhs between 8 am and 1 pm on Monday.
“My shop is running out of supplies due to extensive shopping by customers, and may have to close down earlier than usual,” he said.
He said the shop’s usual sales receipts go up to Rs 70,000 per day at the most.
A fruit vendor said he might not be able to replenish the stock if people continue with panic-purchasing, as the fruits are usually brought to the state by public transport from places like Assam, Sikkim, West Bengal and other states.
As the clock struck 5 in the evening, the police began instructing commercial vehicles such as Tempos, Trekkers and autorickshaws to stop picking up passengers, and to stop plying till 31 March.
When the commercial vehicles were still seen taking on passengers till around 6 pm, the police made them stop their vehicles and barred them from moving.
The state government’s instruction also calls for restaurants and eateries to put a halt on their dine-in facilities, but some establishments were seen open till the police and the administration intervened at about 6.30 pm.
Most vegetable vendors assured that they would remain open since they come under essential services, but said they were concerned whether they could continue to replenish the stocks at the same rate as usual.
In Naharlagun, people were seen hurrying to the shops to buy essential items, especially fresh vegetables, meat and fish. Cars and two-wheelers blocked the roads near the main market there as panic-stricken buyers reached the market for groceries and vegetables. As the day progressed, the vegetable vendors started charging much higher rates for their items.
By afternoon, the fish and the meat markets were almost empty, while the vegetable vendors were busy selling their remaining stock to last-minute shoppers.
Chemists’ shops also remained crowded till late in the afternoon.
While the twin capital towns were panic-purchasing, Ziro, in Lower Subansiri district, observed various Myoko-related rituals even during the ‘janta curfew’ on Sunday, sources in Ziro informed.
“The Twpwr Lwnw ritual was yesterday (Sunday), and there was mass gathering in spite of the ‘janta curfew’,” informed the source.
However, DC Chukhu Takar issued a prohibitory order on 23 March with regard to Myoko celebration, and said that the Ajin Gyoniin ceremony has been deferred to 1 April while the Pamung Agyang ritual “is not to have more than three people in a group, and all cultural programmes remain cancelled.”
In Changlang, following reports of a lockdown in neighbouring Assam from Tuesday, people rushed to the market to stock up on essential grocery items. Till afternoon, most of the shops selling grocery items had gone out of stock.
The Changlang administration has also issued a directive banning the entry of vehicles at the Namdang check gate from 5 pm onwards as a precautionary measure.
As per reports from Namsai, more than the usual number of commuters lined up and stocked up on fuel but did not empty out the lone fuel depot in the town.
According to sources, the markets did not see a heavy flow of customers in the day but it spiked towards the evening.
A woman in a clinic reportedly complained that they do not have masks to attend to the patients.
“Sanitizers and masks are insufficient in the market,” said another resident.
Our correspondent reports: The main market in Lower Dibang Valley HQ Roing was abuzz as the residents came out for last-minute shopping.
Although grocery stores informed that people were buying food items to stock, there was no panic-purchasing, as such.
“More than the usual number of shoppers came to stock up on household and food items. I informed them that all grocery stores would remain open all through the lockdown, but they said they wanted to make sure not to run out of these items,” said a grocery shopkeeper.
Some retailers informed that there were no more potatoes and onions in stock in the godown of the wholesalers. However, the wholesaler informed that the temporary scarcity was caused due to the delay in the arrival of the goods carrier because of some hindrance caused by some students in Assam.
“Our potatoes and onions are on the way and will be available as usual from tomorrow,” he informed, and clarified that there would be no price hike on these commodities.
As for the price hike on vegetables, opinion is divided as one section of the people said they had bought everything at the usual prices while another section said they had to pay more.
As of Monday, grocery stores have reported no scarcity in their stocks of food items, and said there would be no unavailability of such items.
As per reports from Dibang Valley and Lohit districts, the markets functioned as usual on Monday and no report of excessive pricing of vegetables/food items have been received.