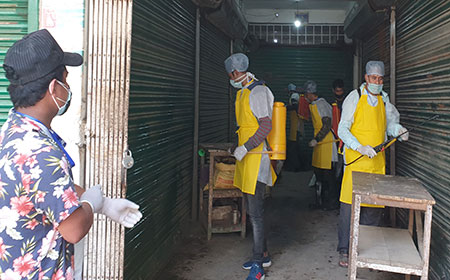 Staff Reporter
NAHARLAGUN, Mar 31: Officials of the Itanagar Municipal Corporation (IMC), the capital complex administration and the fire and veterinary departments who have started fumigating various parts of the capital complex are facing difficulties because of the constant movement of vehicles and people.
On Tuesday morning, the officials had to stop fumigation here due to heavy movement of vehicles and pedestrians.
Speaking to the media, IMC Joint CEO Tadar Tarang expressed concern over the lack of support from the public.
“In the morning we had to abandon the fumigation process. Before starting the process, through loudspeakers we appeal to the people to remain indoors and cooperate with us. Very sadly, people still roam around, thereby creating hurdles,” he said.
Tarang said fumigation resumed in the evening, covering NH 415 and vegetable markets.
“Fumigation will be carried out twice a week in Itanagar, Naharlagun, Nirjuli, Karsingsa and Banderdewa,” he said.
On Monday, the officials had carried out fumigation in Itanagar. The team of 10 workers sprayed chemicals in buildings, shops, business establishments, banks, ATM booths, etc, situated along NH 415.
Fumigation, which started in the morning, was carried out from Ziro Point Tinali to Ganga Market, and covered other areas also.