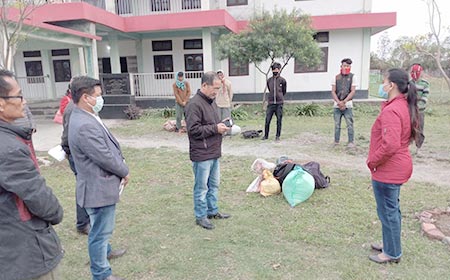 PASIGHAT, Apr 4: The East Siang district administration has converted the Sikshak Sadan here into a relief camp for migrant/stranded labourers.
Deputy Commissioner Kinny Singh, who along with the DDMO and other officers inspected the camp on Saturday, instructed the designated relief officer to ensure that the labourers who are stranded in the district are provided with food, shelter and medicines.
“Adequate food items, including LPG, should be provided immediately, ensuring that no person goes to bed without food,” she said.
According to an official source, the administration has till date provided rations to 80 stranded labourers, students, and daily wage earners.
Six labourers who were working in Siluk, and five persons who were working in Suple village in neighbouring Siang district were brought to the relief camp here on Saturday.
The DC said the officers of the district are doing their best to contain the coronavirus.
“Bordering Ruksin has been sealed and restricted for all kinds of movement, but the area is surrounded by forests and is porous in nature. The check gate is under constant vigil and chance of escape by anyone is very less,” Singh said.
She also asked the media to “verify such issues and include the administration’s comments while filing any report on escape or trespassing.”
Meanwhile, the DC has issued an order directing all the sectors and villages under the Pasighat sadar to dismantle all the temporary gates in the areas in order to allow movement of essential services providers.

In Namsing, where the waterway has been put under lockdown till 14 April, a team led by Circle Officer Khoda Lasa carried out an extensive drive along the Taro-Tamak river, upto the boundary with Assam, and seized 14 canoes and motor-operated boats.
The forest authority has been instructed to set up a camp at the confluence of the Siang and the Taro-Tamak rivers to prevent the movement of any boat towards Namsing from Dhola, Tinsukia and Dibrugarh in Assam.
The road from Ngopok to the Taro-Tamak ghat is under complete lockdown. (DIPRO)