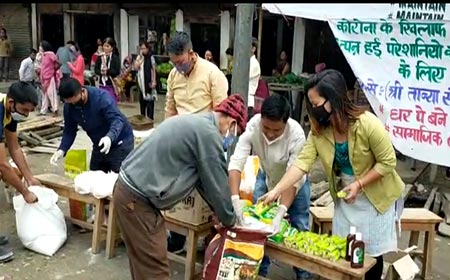 [ Karda Natam ]
DAPORIJO, Apr 5: Local MLA Taniya Soki and his family members distributed rations to over 400 daily wage earners here in Upper Subansiri district on Saturday and Sunday.
The MLA said he would continue assisting anyone who is in need of rations. He appealed to the people to not panic but follow the rules of the lockdown in everybody’s interest.

In East Siang, Pasighat East MLA Kaling Moyong handed over 2000 facemasks to DC Kinny Singh on Sunday.
The MLA also handed over 500 facemasks to Bakin Pertin General Hospital (BPGH), besides distributing facemasks at several place in the town, including the police stations and the check gates.
During discussions with the district’s officers, Moyong informed that the chief minister and the health minister have given assurance that the ICU in BPGH will soon be made operational.
He commended the efforts of the district administration, the police, and the healthcare staffs for providing their services without rest. He also conveyed his gratitude to the NGOs and student unions that are assisting the administration in maintaining the lockdown.
The Pasighat Anandamoyee Kalibari has donated Rs 21,000, the Pasighat gurudwara has provided rations, and Sanggo Gas Agency has provided LPG cylinders and ovens to stranded people.
ABK district vice-president (protocol) Talop Darang and publicity secretary Tarin Taying on Sunday provided mineral water, cold drinks and biscuits to the on-duty police personnel and volunteers. (With DIPRO input)