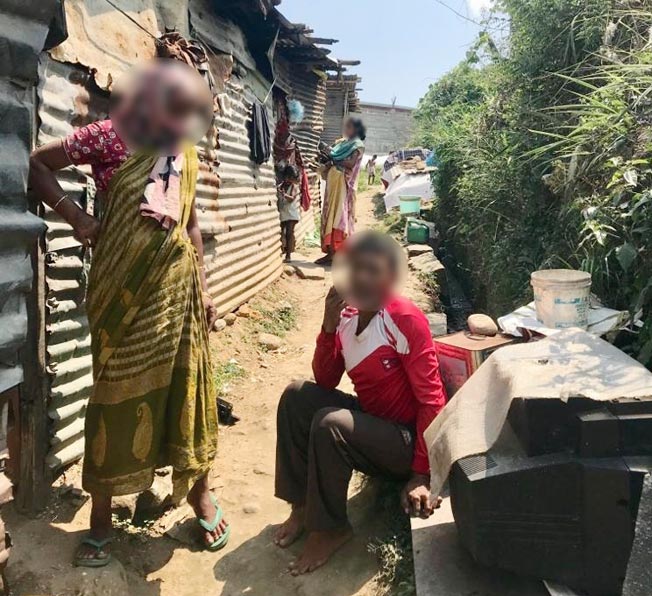 [ Tongam Rina ]
ITANAGAR, Apr 8: Like many others, Mohammad Azid, a migrant worker from Nalbari, Assam, is a worried man. He is stuck in a workers’ colony adjacent to NH 415 – with less than Rs 500 and a limited supply of food – with two of his friends.
Azid came to Itanagar two months ago, looking for better earning opportunities. Before the statewide lockdown began on 23 March, he had worked as a daily wage earner. On a good day, after more than 10 hours of work, he would fetch Rs 600. Sometimes he would go a couple of days without any work.
Prior to the lockdown, he was one of the dozens of workers who waited near Akashdeep in Itanagar each morning, waiting for contractors to assign them work.
Azid is not a registered labourer. He picks up whatever work he can get – from clearing jungles to construction work. He was one of the first people in the capital to lose their livelihood as the administration restricted congregation of daily wage workers at various locations in the capital on 16 March, the same day the state government issued an order to close down all educational institutes and places of public gathering.
There are hundreds of unregistered labourers in the capital who are unlikely to get any financial help, other than food that’s being handed out. Azid and his friends are among them.
The government announced to provide essential items to all unregistered workers. Azid is one of the beneficiaries. On Sunday, he received some rice, daal, salt and oil from the capital administration.
Azid’s colony has more than 30 people who share two toilets. There are no bathrooms or running water. Everybody washes outside their houses made of corrugated thin sheets that look like they are about to fall apart.
In the same colony is Morzina Bano, who also received government handout, which she says will last her three weeks or so.
Eight months pregnant with her second child, Bano says that she is nervous and uncertain what to do.
“It is so stressful I am scared that the baby will come before time,” she says.
Her husband is in Barpeta, Assam. He left a month ago for some work. He was supposed to come back but could not make it before the announcement of the lockdown.
In the same colony lives 40-year-old Upbano, who is a ragpicker. A widow, she makes less than Rs 60 a day. She goes to work every morning to collect discarded water bottles, beer cans, and such. She has two children to look after.
She has stopped going out since 23 March.
“Since there was nothing at home, I tried to go out, but was chased by the police. I want the virus to go,” she says.
Aamir Hussain came to Arunachal in 1972. Originally from Cooch Behar, in West Bengal, he is a former state government employee. He was employed as a worker in the CPWD and the PWD, but was forced to discontinue work because of health issue. He along with his wife collects scrap and sells it to contractors. A kilo of plastic bottles fetch him Rs 10. Beer cans and pieces of iron are sold at Rs 12.
He is worried that his family will soon be left without food.
In another labourers’ colony in Itanagar, Aamir (name changed) says that he was chased by some young boys after the first case of Covid-19 positive was reported. An untrained plumber, he says that he has stopped going out, even though he gets calls for work.
“I am scared because some people say that Muslims brought the virus to Arunachal,” he says.
Aamir was born and brought up in Itanagar. “I have never faced discrimination before, but this time it’s different,” he says.
Will he leave Arunachal?
“I don’t know where I will go, but I am thinking what to do next. I have always lived here and people are kind. Some people give me more than the labour charge, so it’s not difficult to make a living here,” he says.
“I don’t want food from the government right now. But I want the government to give assurance that we will be treated like any other citizen, like before. One person from the community got the virus and not everybody should be treated as if they have the virus,” he says.
Aamir’s phone is filled with screenshots of hate messages directed at the community.
The voice conversations in his friends’ WhatsApp groups are filled with fear and uncertainty. All of them are unregistered workers doing various odd jobs. Some of them work under contractors. Aamir says that the contractors have not been in touch with most of the workers.
Another worker with Aamir came to Itanagar from Laluk two years ago. He works under a contractor who gets him and 25 others construction jobs. He refuses to give the name or the number of the contractor. He says that the contractor called up just once to tell him that food would be provided by the government. He is yet to receive the food or hear from his employer.
“When the lockdown is over, I will go home,” he says.
The worker was called ‘corona’ by a government employee in uniform in Itanagar, when he was out buying daal.
“There may be less money, but I will not be discriminated against in my village because of my looks and religion,” he says.
“I am as scared of the virus as I am of discrimination.”