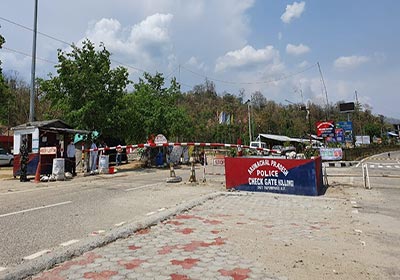 Staff Reporter
ITANAGAR, Apr 12: A student who reportedly came from Guwahati (Assam) and entered the capital via the Hollongi check gate on Sunday morning has been put under quarantine.
Police sources informed that the student came by a private vehicle of his relative from Assam upto the Assam-Arunachal boundary area, and walked from there to the check gate.
“He came on foot at around 8 am, and said he had come from Guwahati. After he walked past the gate, the medical team examined his temperature and allowed him to go with his father, who had come to pick him up,” Capital SP Tumme Amo said.
The father has been identified as Nabam Taring, one of the gaon burahs of Hollongi, in Papum Pare district.
Drama unfolded when the authority came to know that the student had been let go instead of being put under quarantine.
On being alerted by the higher authority, the Yupia DSO and a flying squad tracked down the student and put him, along with six others he had come into close contact with, under quarantine at the quarantine facility in Naharlagun.
Sources said there is no clear instruction from the authority for either the medical team or the police personnel stationed at the check gate on action to be taken with regard to people coming from Assam and other parts of India.
The incident occurred in the wake of considerable pressure exerted on the state government by parents and relatives to evacuate the students and others from the state who are stranded in various parts of India.
The incident has not only demonstrated a breach of the safety protocols with regard to Covid-19, it also exposed how porous the check gates are.
At the same time, it exposed the irresponsible behaviour of the state’s own citizens, especially students, putting the entire state at high risk.
Sources in the government informed that the state government is exploring the viability of whether or not to evacuate the state’s stranded people.
On being contacted, Home Minister Bamang Felix said, “Despite zero percent workout at the entry gate, still it is not foolproof in view of lots of porous places for entries. Therefore, even if they enter illegally, if people remain at home, spreading of the virus can be contained. The only solution is to stay at home.”