PASIGHAT, Apr 16: Due to the massive damages caused by heavy storms in March and April, the electrical division here in East Siang district has been facing serious problems in restoring the transmission lines and the power distribution network. 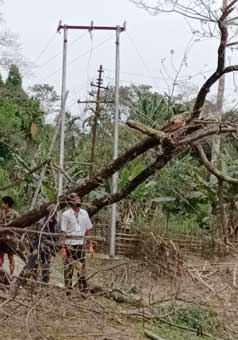 Power EE Tarik Mize said the strong winds that lashed the district on the intervening night of 15 and 16 April heavily damaged the transmission and distribution lines at Borguli village in Mebo subdivision, and in the peripheral villages of Ruksin subdivision.
“However, the department’s team carried out restoration work and restored power supply in Borguli and Ruksin areas,” Mize said.
The high winds led to auto-closure of the Jonai inlet point of the APDCL, Assam, from which the interstate electricity is drawn, in the absence of grid power supply in Arunachal.
According to an official source, there is an urgent need for a vacuum circuit breaker. It would necessitate a good amount of funding by the Arunachal government for the APDCL to procure and install such a circuit breaker. (DIPRO)