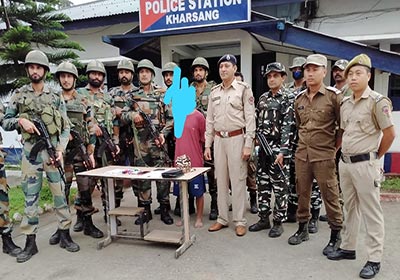 [ Pisi Zauing ]
KHARSANG, Apr 17: A businessman from Namphuk Nalla here in Changlang district, who had been kidnapped for ransom by two suspected members of the Eastern Naga National Government (ENNG), was rescued on Thursday by a team of police and security forces.
The businessman, Narendra Agarwal, was rescued after the arrest of one of the suspected kidnappers, identified as self-styled (SS) lieutenant Arem Tangha, a resident of New Shallang village in Changlang district. However, Tangha’s accomplice, Tujan Rekhong, SS ENNG general secretary, managed to escape.
The duo had demanded a ransom of Rs 1 crore for the businessman’s release.
The police seized a Bolero car, along with a letter pad with the stamp of the ENNG, a knife, and a voter identity card, and registered a case against the kidnappers.
The police team was led by Kharsang Police Station OC, Inspector KM Das.
Meanwhile, the ENNG has issued a statement denying Tangha and Rekhong being its members. Describing the duo as “criminals,” ENNG president R Stephen Naga said “anyone who works against the will of the public of the region and the government of India cannot be a member of ENNG.”
In another case, in Manmao, a police team led by Inspector Kapseng Techi intercepted a drug peddler, identified as Tajen Jugli (32), during naka checking, and recovered suspected opium weighing 256 grams from his possession.
A case has been registered against him under the NDPS Act.
In yet another incident, the 9th Assam Rifles recovered “war-like stores” from the general area of Old Shallang village in Changlang district. It is suspected that the stores had been hidden there by NSCN (R) area commander, SS major Khampong Jugli.
The Assam Rifles team recovered an AK-56 rifle with magazine, 18 rounds of live ammunition, a rifle cover, and combat fatigues.
A case has been registered under the Arms Act at the Changlang police station.