[Nending Ommo]
I had mixed feelings on being approached by Ziro EAC Bamin Tarang to head the home delivery service during the Covid-19 lockdown – an initiative of the Lower Subansiri district administration for Ziro I – not because I could not handle the task but because I was selfish. 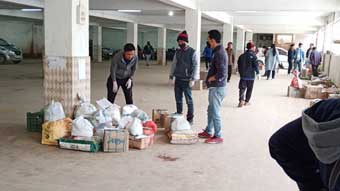 I was apprehensive about moving out of home, putting myself and my family at risk during the pandemic. But on second thought, I realized that someone had to shoulder the thankless task. Tarang took some time to convince me, and to explain the plan.
The next day, on 26 March, we had a meeting at Tarang’s office. He felt the exigency to keep people indoors (safe) and let essential commodities reach every doorstep during the lockdown. He had the conviction and did not waste time. He immediately formed a task force to execute the plan. Then and there he called E-Governance Officer Michi Tabyo and DC office staffer Tage Ranka, delegating tasks to them.
Tabyo was assigned as PR, to receive orders and send them to the vendors, and also to deal with the complaints. Without any delay, he registered a WhatsApp number (60094 76805) for the purpose. Ranka was assigned to design a poster to be circulated on social media. He also got the job done in 30 minutes.
We couldn’t wait. The DA’s initiative was launched from Tarang’s office, in the presence of EAC Tame Yajum at around 1 pm. By evening, we received eight orders, and we delivered them. The first delivery was flagged off by Tarang.
We earmarked 11 vendors for home delivery of groceries, vegetables, medicines, LPG, POS, and other essential commodities. The parking lot in Hapoli was turned into a delivery hub. The routine was, we gathered at around 10 am and worked late into the night,, till 9-10 pm. Payments to the vendors were made every alternate evening. On returning to our homes, all of us got sanitized outside our houses before entering them.
We were joined by volunteers from the Apatani Baptist Association, the Apatani Youth Association, the BJP Yuva Morcha, the Bamin Michi Youth Association, and a few selected volunteers who rose to the occasion on their own. Although many groups, organizations and individuals approached us to help, we did not, and could not, take all because safety of the volunteers was our prime concern and crowding the hub would have been chaotic.
From 26 March to 6 April, for almost two weeks, we served our people. We delivered groceries and vegetables to 2,769 families, LPG cylinders to 1540 households, carried out 160 transactions via mobile ATMs (PoS) and unaccounted deliveries of medicines.
As the supervising head, I would like to thank all the volunteers and staffers from the DC’s office for making the programme a grand success. We risked our lives, yet we accomplished the mission till the programme was called off when the district administration decided to open up the grocery shops in the colonies and the villages.
I thank Michi Tabyo for restlessly being on the phone, receiving orders and complaints, and for the sleepless nights you spent to make sure that every order placed reached the vendors; Tage Mudo for handling all the complaints and enquiries in a calm and mature manner. I miss your smiles and tones on the calls, to which we mischievously used to smile back; Bro Venio Buam for handing the cash and all the transactions with all honesty, assisted by Hano Hailang and Koj Duri; Tage Ranka for handling the back office with sincerity, as always, efficiently assisted by Punyo Meena, Leegang Ampa, Hano Nancy and Vimal Roy; Shivojeet Bhuyan (Babu), assisted by Mudang Elyu and Mudang Takke, for LPG deliveries; Padi Obing for heading the PoS team making cash available at the people’s doorsteps; Tata Mobile drivers Sanu Lama and Babu, who were always on their toes on call.
I can’t thank Tarang enough for trusting me and assigning me the job, and for leading the team from the front. Thanks also to EACs Tame Yajum and Priscilla Tayeng for being with us and encouraging us, and also Hapoli Bazaar Committee general secretary Nada Buda for coordinating with the vendors and allowing us to use his generator, and Radhe Tagia for allowing us the use the parking lot.
Koj Hailey, Tadu Obing, Ligang Tayang and all the volunteers, we will miss our loud conversations and ever active guidance, works and jokes during the breaks.
I also thank AYA general secretary Racho Kacho for contributing more than 200 gloves and participating as one of the delivery boys. Thanks also to UD AE Chakpu Raju for donating gloves and masks. Thanks also to the financial contributors for the team, which selflessly flowed in from Padi Khorey and Aido Ering Bamin, and an anonymous person.
Thanks to all the volunteers. From Apatani Baptist Association: Tage Mudo, Kago Tagang and Hibu Yapa.
From AYA: Racho Kacho (GS) and Tapi Rajen.
From BJPYM: Ligang Tayang, Tadu Obing, Tadu Doilang, Mudang Tama, Michi Bai, Pura Tadu, Tasso Rakesh, Bamin Bai, Dimper Nyikang, Tilling Tara, Bamin Mobing, Talyang Chama and Hage Tabin.
From Bamin Michi Youth Association: Tamo Tamoh, Bamin Tama, Michi Apa, Michi Rakesh, Michi Tama, Racho Yubbey, Tamo Lalung, Tilling Nyikang, Bamin Taka,
Independent volunteers: Koj Halley, Kago Ribya, Hibu Obing, Tilling Yam (Namer), Subu Choku, Kago Aja, Bamin Tamang and Sartam Taja.
Finally, I want to add that not all who ordered might have received, and the reasons could be many – wrong format of order, unavailability of what was ordered, improper address of delivery, erratic mobile network while delivering, different phone numbers of WhatsApp and calls, etc.
We tried our best to serve without a penny’s profit (as it was misconstrued by many that we did it for profit). Forgive us if we couldn’t satisfy all.
“And bear the burdens of one another, for in this way you fulfill the law of the messiah,” says the Bible in Galatians 6:2. And so did we bear one another’s burden. (Nending Ommo was supervising head, Covid-19 home delivery, Ziro I, Lower Subansiri.)