RUKSIN, Apr 23: Over 100 commercial horticulturists of the Siang valley, who have developed small tea gardens in the foothill areas of East Siang and Lower Siang districts of Arunachal and Jonai in neighbouring Assam, are suffering huge losses as tea plucking activities have been put on halt during the nationwide lockdown. 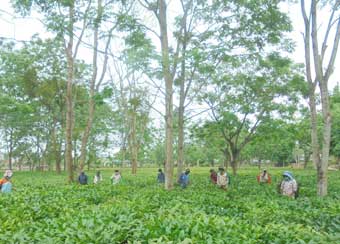 The tea growers had only started plucking in the early peak season, just after the winter pruning, but had to stop the activities with the closing down of the tea processing factories.
The small tea growers of Ruksin (East Siang), Nari and Seren (Lower Siang) and Jonai have decried the losses caused by the lockdown.
Siang Tea Industries assistant manager, Kaling Moyong, who looks after the supply of tea leaves from the small gardens, informed that the growers of Ruksin, Nari-Seren (Lower Siang) and Jonai have had to suspend supplying tea leaves to the factory.
“Loss of production in their gardens during the peak plucking season has incurred huge economic losses to the farmers. I repeatedly moved the authority for special relaxation in order to permit vehicular movement for supply of tea leaves to the factory, but all my efforts were in vain. Now the tea growers are eagerly awaiting the end of the lockdown,” Moyong said.
Following the home ministry’s recently issued lockdown norms, the state government has allowed construction work and industrial activities using existing labourers and materials. As such, the Donyi Polo tea estate in Oyan, along with five nearby gardens, resumed plucking of tea leaves this week. However, the farmers are still facing problems, working with limited manpower, as the gardens are largely dependent on labourers who come from Assam.
“Plucking of tea leaves has resumed in my garden since 18 April, but it becomes a difficult task for me to maintain the garden with limited number of resident labourers,” said Bimal Lego, a tea farmer from Oyan village.
Another tea farmer, Tanyok Taga, who maintains a 40-hectare tea garden near the industrial growth centre in Niglok, also said he is facing the same problem.
Though the activities have resumed at the Donyi Polo tea estate and nearby gardens, about 100 small growers are still unable to resume work due to transportation issues.
The roads along the rural areas of both the states are blocked because of the lockdown, while plying of commercial vehicles (other than those carrying essential items) on the highway along the Assam-Arunachal boundary is currently prohibited.