DAPORIJO, Apr 23: The All Upper Subansiri District Students’ Union (AUSDSU) and the All Tagin Youth Organization (ATYO) have condemned the authority concerned, especially the 23 BRTF, 99 APO, for renaming the Bailey bridge over the Subansiri river in Upper Subansiri district Hangpan Dada Bridge without consulting the local people. 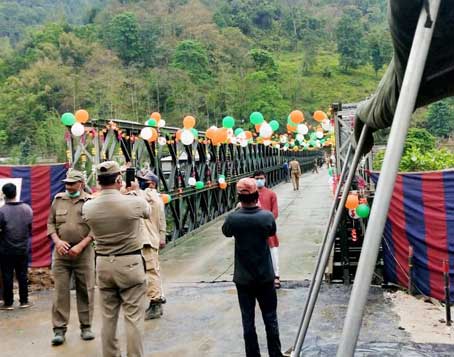 They said that the renovated bridge, locally known as Pul-Dvlo, was inaugurated by Chief Minister Pema Khandu through videoconference “as if a new project were being inaugurated.”
In a representation to the deputy commissioner here, the AUSDSU on Thursday said that the “recent arbitrary decision of the authority in renaming the old bridge without consultation with the local dwellers has ignited a wave of sentiment and anguish amongst the people of entire Upper Subansiri district.”
While it expressed profound respect and regard for the supreme sacrifice made by Ashok Chakra Hangpan Dada, the union said it “condemns and boycotts the way and proceeding of the concern authority in changing the name of old Subansiri bridge (Pul-Dvlo) without consultation with the local people.”
The AUSDSU said the bridge is not only a lifeline of the district, it also has sentimental value, especially for the families who lost their relatives in the tragic bus accident of 1992, following which none of the deceased could be traced.
The ATYO also submitted a complaint to the 23 BRTF commander against the renaming of the old bridge.
It said that “the CM was misguided by concerned authority in renaming and inauguration of the old bridge, which evoked public sentiment.”
The ATYO and the AUSDSU have appealed to the authority to reconsider the decision and name the bridge after a local hero or a social reformer of the district, after consultations with senior intellectuals, leaders, and apex organizations.