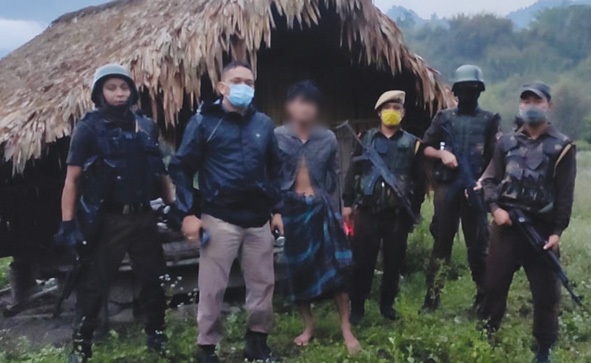 CHANGLANG, May 6: The Changlang district unit police, along with security forces apprehended two NSCN-R cadres identified as self styled rajapio (town commander) Chingmong Mamai (24 yrs) and self styled 2nd lieutenant Jungham Sajung (41 yrs) from
different locations of the district on Wednesday.
Mamai was apprehended from an agriculture hut located at an isolated area here at the wee hours of Wednesday after a team led by Changlang police station Officer-in-Charge Inspector CA Namchoom, along with other police personnel, 9th Assam Rifles and the 171 CRPF launched a joint operation at the general area of Rangkatu village under Changlang circle.
The team recovered suspected opium weighing approximately 255 gm from his possession.
During on-the-spot interrogation, the cadre admitted that he came for extortion in the name of the NSCN-R organization, police informed. Mamai was also wanted in many other extortion cases reported at the Changlang police station.
In another incident, the team led by Manmao police station Officer-in-Charge Inspector K Techi, along with the 9th Assam Rifles launched a joint operation in the jungles of old Jukhi under Manmao circle on 6 May.
During combing operation, NSCN-R underground cadre Sajung was apprehended from the forest tract near Old Jukhi village.
A case has been registered at the Changlang and Manmao police stations against the apprehended ultras under relevant sections of laws.
The teams worked under the command of Superintendent of Police Mihin Gambo.