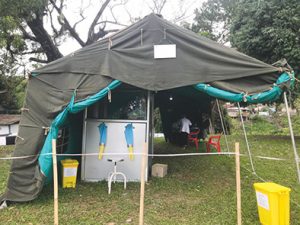 [ Tongam Rina ]
ITANAGAR, May 9: Officials says that Arunachal’s Covid-19 RT-PCR lab at the Tomo Riba Institute of Health and Medical Sciences (TRIHMS) must not be overloaded with screening samples “till machine and man collapse.”
Officials say that ELISA, TRUENAT, CBNAAT should also be used in the state for screening the samples, and for confirmation, samples should be sent to the RT-PCR lab.
The health department on Friday had said that TRUENAT would also be used subject to approval by the ICMR, which was expected on Saturday.
The health department had said that if a sample is tested positive in TRUENAT as per protocol of ICMR it still needs to undergo RT-PCR testing.
The NHM lab has three TRUENAT machines and each machine can test seven samples per day so the load on TRIHMS will lessen, the department said.
According to the health department, there are not enough microbiologist and lab technicians to use the CBNAAT, which is available in some of the districts and recommended by health practitioners.
Till 8 May morning, 211 samples in total were received by the TRIHMS lab, of which, results of 187 samples were returned.
The RT-PCR or the real time polymerase chain reaction tests require highly technical skills to operate and the lab technicians do not have the skill to do RT-PCR independently. They do sample processing and do RNA extraction, the officials said.
Research scientists have also been deputed to train the staff. The process to appoint a medical biotechnologist on a short-term basis is reportedly ongoing as the state is struggling with lack of trained and skilled human resources.
The seven lab technicians on duty are reported to be “highly motivated to work for the cause”.
The state does not have enough trained technicians and the technicians had to undergo training after the outbreak of Covid-19 in the country.
The already overworked lab is further constrained by delayed arrival of samples.
They suggest that samples should reach the lab latest by 2 PM for them to return the result at the earliest. At 5.30 PM on Saturday, a consignment of samples was received from the PTC Banderdewa quarantine facility.
On Saturday, 47 were reported by the lab, which works for 12 hours on an average and there were no pending cases.
The state Covid-19 RT-PCR lab has received only 18 samples from Kota returnees till Saturday morning. The RT-PCR tests were done by the lab and no report is pending. All of them have tested negative.
On Saturday, 243 samples were collected, according to the surveillance cell bulletin, taking the total to 1597. The results of 329 samples are awaited.
Apart from the lab in Covid-19 RT-PCR lab in the state, the samples for testing are sent to Dibrughar and Tezpur in Assam. Two technicians have been deputed by the state’s health department to Tezpur.
The state government has also said that those who enter Arunachal will have to mandatorily undergo the RT-PCR test.
Meanwhile, health officials say that the state should have swab collection kiosks in all the major institutional quarantine centres across the state. “This will help limit the exposure and reduce movement of those who have returned from outside the state,” they said.
“We cannot send everybody staying in quarantine centres to the PTC or TRIHMS in order to have the swabs taken,” they said.
The PTC has a kiosk for sample collection.
Officials say that some quarantine centres in the state are far from the nearest swab collection centre, so instead of those in quarantine centres going to hospitals, it would be safer to have to swab collection kiosk in the quarantine facility itself.