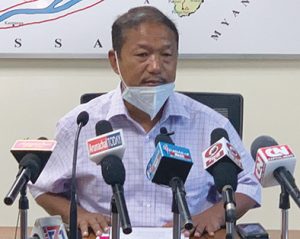 Staff Reporter
ITANAGAR, May 9: The state government has stepped up the effort to fight Covid-19 by stationing the Papum Pare deputy commissioner (DC) at the quarantine facility (QF) in the Police Training Centre (PTC), Banderdewa to oversee the situation.
The DC would be assisted by the Papum Pare superintendent of police till the crisis is over.
During a press briefing held at the Civil Secretariat here this morning, Home Minister Bamang Felix informed that the cabinet meeting was held on Friday to review the preparedness against Covid-19.
The home minister informed that RT-PCR tests for all returnees, including asymptomatic persons would be mandatory.
The government also decided to segregate all the returnees in quarantine facilities on the basis of the zones (red, orange and green) as categorized by the Centre, Felix added.
On being asked about the status of evacuation plan of stranded students and people from other parts of India, Felix said that “The government is not asking all the stranded to come back but we will facilitate the return of those who want to.”
He further warned that whoever tries to sneak into the state without informing the authorities would be dealt with strictly as per established law.
Felix also informed that the BPL Colony of the urban development at Lekhi has been identified as the state quarantine centre.
He said Education Minister Taba Tedir has been appointed as chairman for the task to convert the colony as QF within 10 days.
The departments of power and PHE have been directed to assist the UD department in the arrangements, while the Capital Region DC has been assigned to manage the logistics of the QF.
The DC Capital has also been directed to identify more paid QFs in the capital, said the minister.
The government has restricted all essential service entry from Banderdewa except FCI truckers whose depot is at Karsingsa.
“The Banderdewa check gate is exclusively for the people. Entry of essential services trucks and vehicles will be routed through Hollongi check gates,” he said.
“Essential services vehicles for districts like Upper Subansiri, Kurung Kumey, Kra Daadi, Kamle, Lower Subansiri, East Kameng and Pakke Kessang should be routed through the Gumto check gate,” the home minister added.
He appealed to the people coming from eastern Arunachal to take the route through the Banderdewa check gate.
Clarifying on the modifications of standard operating procedures (SOP), he said the SOP is not permanent and would change depending on the situation in the pandemic.
He appreciated the efforts of the medical team, police personnel, district administration, media and the public who have been toiling day and night in making Arunachal a green zone state. However, he cautioned citizens and asked them to remain vigilant as “the Covid19 has just begun.”
On the preparedness of QFs across the state, the home minister appealed the public not to go by half-truths posted on social media.
“We need to fight together to beat coronavirus instead of resorting to pointing out flaws,” he added.