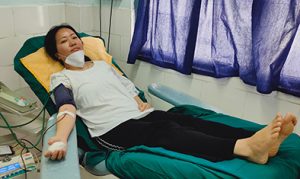 ITANAGAR, May 11: The Galo Welfare Society (GWS) on Monday launched a three-day ‘pan-Arunachal voluntary blood donation programme’ at all functional blood banks of the state to commemorate the first death anniversary of its former president, Dr Minge Loyi.
Eighty-seven units of blood were collected on the first day.
The GWS launched the programme after learning that there is acute shortage of blood at all the blood banks of the state because of the nationwide Covid-19 lockdown.
Blood donation camps were held at TRIHMS and RK Mission Hospital (RKMH) here, besides the general hospital in Pasighat (East Siang) and the district hospitals of Lower Subansiri, Upper Subansiri, West Siang, Lohit, Upper Siang, Tawang and West Kameng.
The camp at RKMH here was inaugurated by Capital SP Tumme Amo and RKMH secretary Swami Vishweshananda, while TRIHMS Director Dr Moji Jini inaugurated the programme at TRIHMS, Naharlagun.
The voluntary blood donation programme will continue on 12 and 13 May, from 9 am to 2 pm. The GWS has requested conscientious people of the state to come forward and donate blood.
Born on 3 December, 1968, late Dr Minge Loyi graduated in veterinary & animal husbandry sciences from Assam Veterinary College in Khanapara, Guwahati, in 1991.
He was appointed as veterinary officer in August 1991, and was promoted to the post of district veterinary officer in December 2008. He was serving as DVO of Papum Pare district since 2013.
Dr Loyi passed away on 11 May, 2019, in Guwahati due to cardiac arrest, after attending a meeting organized by the North East Forum for Indigenous People in Shillong, Meghalaya, to discuss the issues concerning the people of the northeastern region. He had attended the meeting as a delegate of the Arunachal Indigenous Tribes Forum.