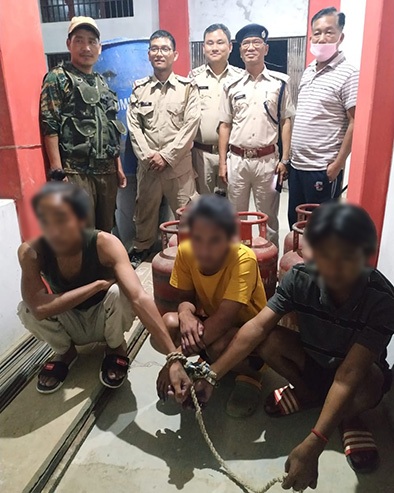 LONGDING, May 13: Three youths were arrested by the police here on Wednesday in connection with many cases of house breaking and stealing.
According to the police, the youths identified as Gangkai Gangsa of Jagan Village, Atoh Wangnaw, Konnu village and Ajay Wangsu of Niaunu village are habitual offenders.
They are reportedly narcotic drugs dependent and used to steal LPG cylinders, TV sets, etc from shops and different houses to buy drugs.
Longding police station officer-in-charge O Lego said, “We started investigating on receipt of multiple complaints of house breaking and stealing from various quarters. Accordingly a police team, led by Sub Inspector (IO) J Wangsa, was constituted and was successful in raiding the house where the stolen items were disposed of at throw-away prices by the trio, which led to the arrest.”
The police have also arrested four persons who bought stolen LPG cylinders and other items and an investigation is on.
So far, police have recovered and seized six LPG cylinders, 16 pieces of 16mm iron rods and other items.
The SI informed that a case has been registered under Sec 411/34 IPC. (DIPRO)