NAHARLAGUN, May 14: Twenty-two traders, along with a wholesale dealer who was pressuring retailers to buy additional items, were booked by a team of the Legal metrology & consumer affairs (LMCA) department on Thursday. 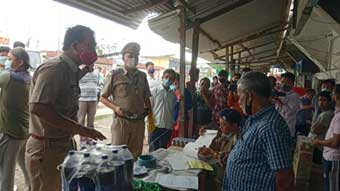 The traders were booked for violating the Legal Metrology Act (LMA), 2009, mostly by selling commodities at exorbitant prices.
A team of the LMCA, comprising Assistant Controller Amrit Taba, Inspectors Debia Tana and G Singpho, and TA Sangio Talar, assisted by the police, inspected about 90 trading premises in Doimukh market, Dikrong Colony, Nirjuli and Rono areas, and came across irregularities at 23 shops, including the wholesale dealership.
The wholesale dealer, who has been registered for violating the LMA, was found selling aerated cold drinks to retailers at the MRP, without giving the retailers profit margin, but with the condition that the purchasers buy two additional packs of 200 ml apple juice at Rs 40.
“He not only violated the norms of a wholesaler but also practiced unfair means of trade by compelling buyers to buy products they are not interested in,” said Taba.
“We are bound to buy the apple juice that we do not want to, because there is no other wholesaler in Doimukh,” Taba quoted a retail shopkeeper as saying during the inspection.
Taba, who is also the Papum Pare district consumer protection officer, said that the department would “continue to crack the defaulters in the supply chain until the ethics of business norms is resumed, particularly in the capital complex and its neighbouring areas, as most of the consumer complaints received are from this locality.”