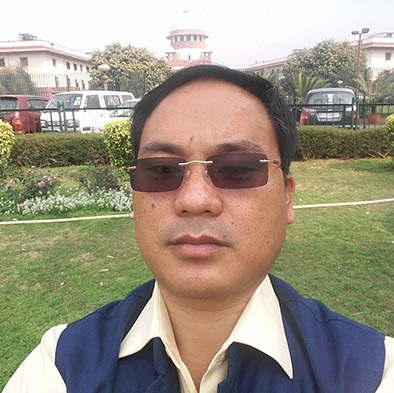 [ Tongam Rina ]
ITANAGAR, May 15: The investigation into the Tirap massacre, in which 11 people, including NCP MLA Tirong Aboh, were assassinated, remains inconclusive.
They were travelling in a four-car convoy when they were ambushed and massacred by suspected NSCN (IM) militants near Bogapani area in Tirap district on 21 May, right next to the busy Pansumthong tea garden.
Of the 15 people in the convoy, 11 lost their lives.
During the campaigns for the parliamentary and the state legislative assembly elections held in April-May last year, Aboh had repeatedly called out the NSCN (IM) for its involvement in the electioneering process.
He had sought security cover, which was not provided to him. Instead, the police and IRBn personnel were withdrawn from the district. The personnel were withdrawn as they had to be deployed in Kra Daadi and Kurung Kumey districts, following repeated incidents of election-related violence there.
The case was handed over to the National Investigation Agency (NIA), which is currently investigating it. Though some progress has been made, the main suspects – NSCN (IM) leaders Absolom Rockwang and James Kiwang – remain out of reach of the NIA.
As of now, five people are in custody, while one is out on bail.
On 27 January, the NIA had filed a charge sheet before the NIA special court in Yupia, in which it named Luckin Mashangva, Jai Kishan Sharma, Yangte Josaham and Napong Jenpi @ Jenpi. A supplementary charge sheet was later filed against Ellie Ketok.
One Senthok Kangnong, who was also arrested in August 2019, is out on bail. Reliable sources say that he was questioned by the NIA.
The NIA had earlier said that “investigation has established that members of the terrorist group of NSCN (IM) conspired to commit the terrorist act of killing of Tirong Aboh, MLA Khonsa and 10 others. Investigation further established that the terrorist act was a result of larger conspiracy due to opposition by MLA, Khonsa of anti-development and extortion activities of NSCN (IM) in Tirap district.”
It said investigation revealed that members of the NSCN (IM), led by major general Absolom Rockwang along with the four charge-sheeted, formed a terrorist group which was financed by Jai Kishan Sharma.
The NIA had registered cases against them on 10 June, based on an FIR filed on 21 May at the Khonsa police station.
Meanwhile, Puman Wangsu, another suspect, was arrested from Longding district on 14 May.
Kohima-based Defence Spokesman, Lt Col Sumit Kumar Sharma, informed that personnel of the Indian Army in a joint operation with the Longding police arrested Wangsu from a forest near Longphong village.
The defence PRO later tweeted that Wangsu is suspected to have been involved in the assassination of the ex-MLA and the 10 others.

The two main suspects – NSCN (IM) leaders Absolom Rockwang and James Kiwang – are yet to be arrested.
Major general Rockwang was the operation commander for Tirap, Changlang and Longding, while Kiwang, a Myanmarese national settled in Tirap, is a kilonser and belongs to the outfit’s civil wing.
Their houses in Dimapur, Nagaland, were raided in early March this year.
Official sources say that Absolom Rockwang was one of the main persons behind the assassination of former MP Wangcha Rajkumar, who was killed in Deomali on 23 December, 2007, while he was playing badminton.
Rockwang was out on bail when the Khonsa massacre was carried out.

The security forces and the state police wound up their search operation in Tirap district within days after the massacre, without any success.
Questionably, the search operation was started a day after the assassination. Many say that, had the state police and the security forces acted on the same day, the outcome could have been different as the killers were still near the village where the convoy had been attacked.
The search operation, which had begun on 22 May, was concluded on 29 May. Defence sources had confirmed to this reporter that the search operation had been called off, but later they retracted, saying that the operation had been intensified, and that a joint operation with the police and the civil administration was ongoing.
Though a charge sheet has been filed, there is no conclusion yet and hearing is yet to start. Sources say that it’s yet to start because of the Covid-19 pandemic.

Those who were assassinated along with 47-year-old Tirong Aboh on 21 May included his workers and close relatives Wangngoi Hakhun (35), Jalin Hakhun (33), Wangngu Hakhun (30), Gamwang Hakhun (28), all from the same family, teacher Tangro Atoa (47), PSOs Poanhang Agi (38) and Khundong Siksa (50), driver Patwang Sumpa (20), Aboh’s son Along, and nephew Matlam.
Along and Matlam were 20-year-old college students.
Wangdan Hakhun (26) and Wangsen Hakhun (32) were injured and had to undergo long medical treatment outside the state.
PSO Nokliam Tekwa and a worker in the Aboh household, Nyajut Hakhun, escaped the massacre unhurt. Both were questioned by the NIA.
Aboh defeated his BJP rival, Phawang Lowang, in the legislative assembly election.
Chakat Aboh, the wife of Aboh, later stood for the bye-election and won against Azet Homtok.
Chakat Aboh was chosen as the consensus candidate of five political parties, including the Bharatiya Janata Party, the Congress and the NPP.