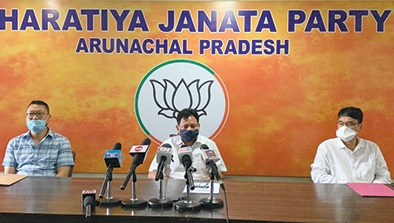 Staff Reporter
ITANAGAR, May 16: Rallying behind Prime Minister Narendra Modi’s Rs 20 lakh crore economic package under the self-reliant India programme, the state Bhartiya Janata Party (BJP) on Saturday stated that “the economic package would be beneficial to the country and state in particular.”
Addressing the media at its party office here, BJP state president Biyuram Waghe said, “The economic package is to boost the crumbling economy of the country in the wake of the Covid-19 crisis”.
Waghe said that the economic package is “different from the yearly budget and it would be greatly beneficial to the country and especially Arunachal Pradesh.”
Waghe further claimed that the Rs 1 lakh crore agriculture infrastructure fund, which was announced by the union finance minister, would help revamp the agricultural infrastructure in the state including introduction of cold storage facilities.
“Our farmers and people can benefit a lot from the new scheme worth Rs 10,000 crore, aimed at formalisation of micro food enterprises and Rs 15,000 crore for animal husbandry infrastructure” said the state BJP president.
He said that new agriculture marketing reforms would remove barriers in inter-state trade, which would help the farmers to market their produce.
Among others, BJP state general secretary cum Namsai MLA Zingnu Namchoom and general secretary Nalong Mize were present during the press briefing.