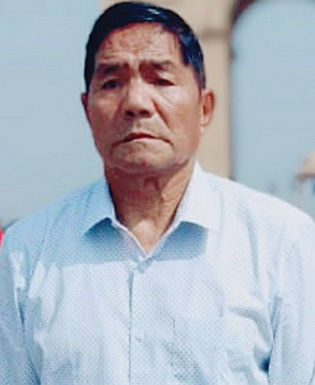 BASAR, May 18: Migo Basar, a philanthropist passed away on 17 May after brief illness.
He was the father of MLA Gokar Basar.
Born to late Karmi Basar and Moyo Angu Basar in 1957 in Soi village of Leparada district, Migo Basar was a philanthropist and had donated land for establishment of the old Basar town and the upcoming new district headquarters of Leparada.
He also donated land for the Gori village playground and for establishment of the Donyi Polo Gamgi at Soi village.
Basar was a gram panchayat as well as anchal samity member.
He had also served as bazaar secretary of Basar Township and established the Chirne village and had it recognised by the government.
He has also served as Congress block president for three consecutive terms.
Basar championed for promotion of the indigenous faith movement and performed various Galo traditional festivals and rituals.
Basar was widely recognized by all the communities. He took stride for the establishment of the Chaat Puja ghat on his plot along the banks of Hie River in Basar Township for the Hindu worshippers and also allowed for establishment of a church in his plot at Chirne village.
He was a social reformer and widely recognized as a great orator and practioner of the Gomku Agom in Galo Gumin.
Basar put in a lot of effort for the promotion of education in Basar area as member of school management committees. He was also a progressive farmer and motivated others for taking up fishery and horticultural crops by setting himself as an example.
He is survived by his two wives, five sons and three daughters
His mortal remains will be laid to rest at his native Hoi (Soi) village on 19 May.
The Galo Welfare Society (GWS) deeply mourned the passing away of Basar.
While conveying heartfelt condolence to MLA Basar and his bereaved family members to bear the irreparable loss, the GWS prayed to almighty for eternal peace of the departed soul.
The state unit of the National People’s Party expressed shock and profound grief over the sudden demise of Basar and offered heartfelt condolence to the bereaved family.
“He was a great visionary leader and contributed immensely for all round development of the state,” party’s state vice president and spokesperson Nima Sangey Saling said in a condolence message.
Stating that Basar’s untimely demise is a great loss for the state, Saling said his contribution to the state in various fields will always be remembered by the people of the state.
He also served as the president of Basar Mandal BJP and was involved in different social organizations and rendered valuable services to the state during his long political career.