DADAM, May 21: The first death anniversary of former MLA Tirong Aboh and 10 others, who were killed in a massacre on 21 May, 2019, was observed here at Tirap district on Thursday as families gathered at the massacre memorial ground to pay homage to the departed with candles, flowers and prayers. 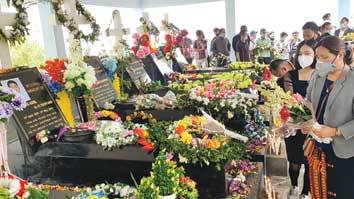 The 10 others who were killed on the day included Aboh’s 19-year-old son Along Aboh, PSO Mj Khundong Siksa, PSO Poahang Agi, Wangngoi Hakhun, Jalin Hakhun, Tangro Atoa, Matlam Aboh, Wangngu Hakhun, Ganwang Hakhun and Patwang Sumpa.
The formal programme began with lighting of candles and offering of flowers and prayers by the family members and others led by Pastor Kamdong Atoa and Father of the Catholic Parish Church, Dadam.
Manlang Agi and his younger brother Toangi Agi sang songs of remembrance.
Khonsa West MLA Chakat Aboh, wife of the late MLA, released a documentary and book on ‘Untold story of inborn leader – Late Tirong Aboh, 1978-2019′, which has been written and published by her.
Later, Chonnya Aboh released birds to mark the first death anniversary of her father, late Tirong Aboh, her elder brother, late Along Aboh and the nine others, who were massacred on 21 May, 2019.
Reading out the life history of the former MLA, Wangthian Hakhun termed Tirong as an inborn leader, who, within a short span of his political career, had created many infrastructures.
The formal program of the first death anniversary of the 11 was concluded with words of gratitude from Jewang Sumnyan on behalf of the people of the victimized family and Dadam village.
Tirap SP Kardak Riba, CO Pil Tayom, parents and next of kin of all 11 victims attended the memorial service, which was observed under the purview of the nationwide lockdown guidelines by maintaining social distancing.
The All Tirap District Students’ Union, headed by its president Hangba Tonrang also observed the day at Khonsa bus stand in Tirap district with two minutes of silent prayers and lighting of candle as a mark of respect for all the departed souls. (DIPRO)