BOMDILA, May 21: Incessant rainfall for the last few days in the district has resulted in landslides and washing away portions of roads at multiple places along the stretches of the Balipara-Charduar-Tawang (BCT) road. 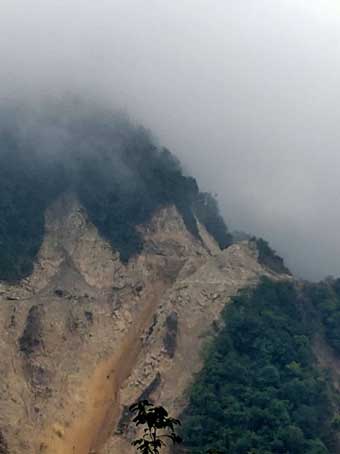 Heavy rainfall have triggered multiple landslides and washing away portions of roads in between Bhalukpong check gate and district headquarters Bomdila on the BCT road. The power supply to the district has also been affected.
The Bhalukpong check gate under West Kameng district is the point of entry (PoE) for the districts of West Kameng, East Kameng and Tawang.
The local administration of Bhalukpong has put into action ‘Plan B’ on Thursday by re-routing the stranded persons of West Kameng and Tawang through the Orang-Kalaktang-Shergaon-Rupa-Tenga (OKSRT) road.
“We are screening the stranded persons coming from outside at Bhalukpong check gate and providing refreshments along with packed meal and re-routing the people of West Kameng and Tawang via the OKSRT road,” informed Bhalukpong EAC Tamo Riba.
Superintendent of Police Raja Banthia informed that owing to the present crisis, there would be only one convoy per day and shall move under police escort without stopping anywhere between Bhalukpong and Balemu check gates.
The PoE shall be Bhalukpong as usual and not Balemu. The returnees shall have to report to Bhalukpong check gate only, the SP said.
However, the convoy for East Kameng shall continue to be escorted by the Seppa unit police from Bhalukpong to Seppa via the Pinjoli-Khuppi road, he added.
The worst affected on the BCT road is the KM 77.800 where 150 meter stretch of road had been completely washed away.
Heavy landslides have occurred at KM 75.300, KM 76.700 and KM 82.300. Landslide has also affected the KM 104 / Kaspi Nallah near Nag Mandir.
Deputy Commissioner Karma Leki, the night before, issued directives to all administrative officers to take precautionary measures to avoid any damage to life and property in the district due to the cyclonic storm-Amphan.
Incessant rainfall has been battering the district since last one week and there seems no early respite. (DIPRO)