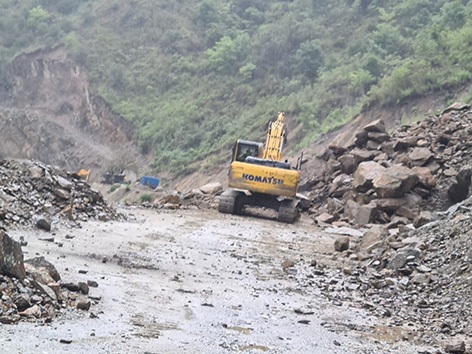 Staff Reporter
BOMDILA, May 23: Inordinate delay in clearing the blockades along the Bhalukpong-Charduar-Tawang (BCT) road has reportedly hampered the restoration attempt on the 132 KV transmission line which had been disrupted by strong winds and heavy landslide at multiple locations between Sessa and Saddle in West Kameng district.
The 14 Border Road Task Force (BRTF) is executing the BCT road.
This daily sent several queries to the 14 BRTF regarding the restoration work but could not receive a response till the filing of this report.
Heavy blockades were reported between Elephant Pass, Sessa, Saddle and Nechipu on Thursday. The district administration in West Kameng district has confirmed that the blockades are yet to be cleared.
Reportedly, unless the road is restored, there would be a delay in restoration of the 132 KV line to West and East Kameng district, which remain without power supply currently. The district depends on power from the Power Grid Corporation of India Limited (PGCIL) Balipara, Assam via the 132 KV line.
The power department executive engineer in Dirang, West Kameng district informed that “total power supply is disrupted in West Kameng, East Kameng and Pakke-Kessang districts due to tripping of the 132 KV line Balipara-Dukumpani-Khuppi.
The executive engineer further informed that a restoration team of the NEEPCO moved towards fault locations-Elephant and Saddle. However, the team could not proceed further due to heavy blockades.
“The team took an alternate route via Kimi-Khuppi-Nechipu (Zero Point) but could not move further because of blockades,” the EE added.
The restoration team marched on foot for few kilometers and had cleared the bamboos and trees on the way of the transmission route.
The EE further said that restoration work might take further time till the road blockade is cleared.