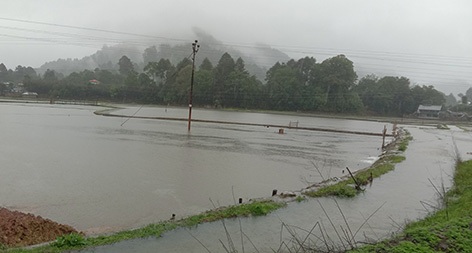 ZIRO, May 23: Rain water has flooded paddy fields in many villages here in Lower Subansiri district, causing heavy losses to the famers.
The wet rice cultivation (WRC) fields near the Mudang Tage tri-junction, Tajang, Dutta and Hija villages were the worst affected.
Occurrence of mudslide causing heavy damage to standing crops has also been reported from Siiro village.
The recently released fingerlings in the paddy fields by the fisheries department have also been feared washed away by the overflowing Kley River.
SDO B Tawsik, along with CO Sadar Khoda Jalyang, DDMO Nima Drema, the DFDO and DAO surveyed the damage caused by the first heavy rainfall of the season.
The people have also been cautioned against venturing into the Kley River for fishing. (DIPRO)