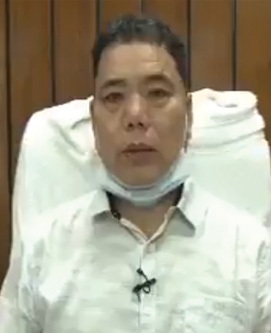 Staff Reporter
ITANAGAR, May 25: Health and Family Welfare Minister Alo Libang asked the public not to panic after the state recorded its second Covid-19 positive case.
Addressing journalists in a hurriedly convened press briefing at his official bungalow in Niti Vihar here, along with Health Secretary P Parthiban and State Surveillance Officer Dr L Jampa, the minister said that “district authorities have been directed to collect swab samples of all the returnees of the same bus for re-test”.
Updating on the health condition of the Covid-19 positive youth, who had recently returned from Delhi, Libang said, “The person has been immediately shifted to the Covid care centre. He is asymptomatic and doing fine.”
As reported earlier 61 passengers had travelled from Delhi in two buses and had reached Arunachal on 18 May.
Of the 61, while one has tested positive, 31 tested negative; results of 26 are awaited and three are yet to be tested, according to the daily Covid-19 bulletin issued by the health department.
There were 33 people in the same bus that travelled from Delhi to Arunachal via Uttar Pradesh, Bihar, West Bengal and Assam, the health department informed.
The minister appealed to the public to cooperate with the authority and maintain – social distance, mandatory mask wearing and self-hygiene. He acknowledged the frontline workers including media for performing their duty risking their own lives.
Libang further appealed to NGOs and like-minded people to help in creating awareness on safety measures to contain Covid-19 from spreading.
Meanwhile, Libang informed that backlog of sample testing is due to overwhelming numbers in Assam as thousands have returned to Assam.
The health and family welfare secretary said the department has details of all the passengers who travelled with the person that tested positive on Sunday evening.
“In fact, we have details of all the returnees who entered into the state through 11 check gates and the details were also shared with the respective administrations” the health secretary said.
Meanwhile, as per officials, out of 11026 people who registered online, 5712 people have returned to Arunachal from different parts of the country. According to the minister, 5428 swab samples of returnees have been collected so far, while swabs of 284 people are yet to be collected.