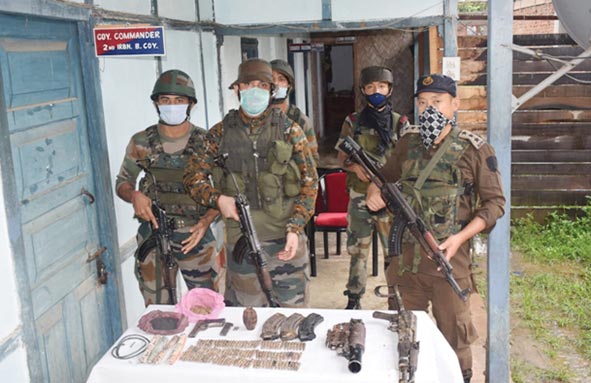 MIAO, May 27: A huge cache of arms and ammunition, suspected to be hidden by an insurgent group, were recovered by a joint team of the 9 Rajputana rifles and Miao SDPO from Miao Bum jungle area here under Changlang district on Wednesday.
The seized items include an AK 56 assault rifle, three magazines, 115 rounds of 7.62 mm live ammunition, one UBGL (40mm), one hand grenade, four sticks of explosive powder gel (500gm),
explosive gun powder (250 gm), explosive (red phosphorous) (260 gm), cordex one metre, one detonator, one .22 pistol and three .22 rounds.
Based on FIR filed by 9 Rajputana Rifles, a case has been registered at the Miao police station under relevant sections of laws and investigation is on, informed a release from Changlang SP Mihin Gambo.