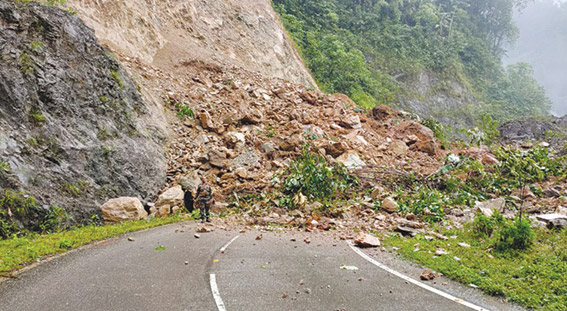 Staff Reporter
PASIGHAT, Jun 3: The Pasighat-Pangin road, which is also the national highway (NH) to Aalo in West Siang district, is blocked after heavy landslide occurred along the NH-13, about 31 Kms from Pasighat in East Siang district on Wednesday morning.
The district administration had also issued a public advisory asking the people to refrain from travelling on the route. However, by evening, the highway department built a bypass for temporary passage.
“The blocked point on the Pasighat-Pangin road (NH-13) at 31km will take time for clearance because of huge landslides with rock/ big boulders, which will require blasting. However, we have constructed a bypass road and opened the road for traffic at 3.30 PM,” said Highway Pasighat Division EE Dabe Perme.