DTOs to be investigated

[Staff Reporter]
ITANAGAR, Jun 4: The Itanagar police on Thursday laid bare the chain of owners, sellers and buyers involved in the luxury sports utility vehicles (SUV) theft case which had been registered at the police station here. 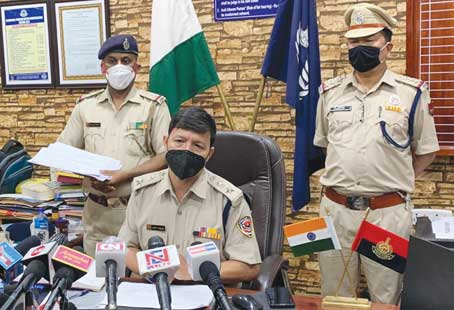 A case (No 22/2020 u/s 120/379/465/411/413/468/471/420/34 IPC) had been registered at the PS here after the police had recovered 26 SUVs, among them 22 Toyota Fortuners, two Hyundai Cretas, and two Maruti Breezas.
There was speculation whether the capital police would be able to disclose the names of the persons behind the high-profile case.
Addressing a press conference at his office on Thursday afternoon, Capital SP Tumme Amo said the police started investigating the case after a person from East Kameng HQ Seppa had lodged a complaint against the owner of a Fortuner, claiming that the car was a stolen one.
“In January we got inputs that the stolen car was on the way to Itanagar. Luckily, we seized two stolen cars and apprehended two persons, Vickey Gurung and Passang Tamang,” the SP informed.
“The case IO, SI Neeraj Nishant and Itanagar SDPO Kamdam Sikom, along with the entire team have worked hard in the entire operation to seize all illegal Fortuners and other cars,” Amo said, lauding his subordinate officers for cracking the case.
Giving details of the operation, the SP said, “Seizing 22 Fortuners, two Cretas and two Breezas in a single operation is (the cracking of) one of the biggest theft cases in India. I and IO Neeraj Nishant had to go to Delhi as part of the investigation, and found out the records of 21 vehicles out of 26.
“Maximum vehicles are from Delhi, and cases were already registered against these vehicles in many states, including Delhi, Haryana, Punjab and UP,” he said.
Amo said that, among the stolen cars, 20 fall under theft cases and one under robbery case, as it belonged to the family of (former Bihar CM) Lalu Prasad Yadav.
“In five of the cases, we are trying to find out if cases have been registered against them anywhere in India,” he said.
He informed that the racket involved an interstate gang operating out of Delhi and NCR region. The gang’s modus operandi was to tamper with the number plates and the engine and chassis numbers, and then sell the vehicles to parties in Guwahati, Assam, at cheaper rates. Later, middlemen would deliver the vehicles to Arunachal and other parts of the Northeast at higher rates.
“The local buyers of the illegal SUVs are Bamang Yakia, Michi Tamang (Creta), Neelam John (Breeza), Tapak Natam, Tabe Marging, Tasen Malling Roomching, Doba Lamnio, Techi Tabang, Akhya Pordung, Bamang Taigh, Dangu Mama, Toko Tam (Creta), Ravindra Tana, Nabam Takar, Taba Tader and Giogi,” the SP said.
He added that two Fortuners were found abandoned near the museum at Zero Point, Itanagar, and another was found at Gohpur Tinali, near the Hotel Bomdila, “and the owner was later identified as Bengia Takar of Papu Nallah.”
The SP further informed that two Fortuners, belonging to Tagung Neri and Kaya Tara, were found hidden inside the cement store building in Paga Tara Jully, and one more Fortuner was seized from Tarajuli, in Papum Pare district.
The SP said that “Section 411/413 attracts the buyers as the burden of proof, and they could be sentenced to three years’ imprisonment for buying and possessing stolen property.”
He also informed that, after thorough cross-checking, criminal investigation would be carried out against district transport officers (DTO) who were responsible for issuing fake registration numbers for the stolen cars.
The SP disclosed that the capital complex DTO issued six registrations, and the Kurung Kumey DTO issued four.
Among the stolen cars, the SP said, five have the same chassis number.